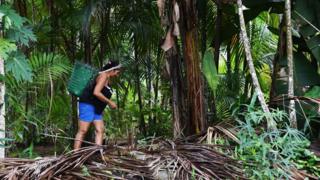 An area of Amazon rainforest roughly the size of a football pitch is cleared every minute, according to satellite images.

The Amazon is the world's largest tropical rainforest with the majority of it situated in Brazil, South America.

But since Jair Bolsonaro became Brazil's president at the beginning of 2019, satellite images show a sharp increase of forest clearances.

Mr Bolsonaro want to cut down parts of the rainforest for development rather than protecting the natural features.

Find out more about forests

Palm oil: How is it threatening orangutans?

Why is the Amazon rainforest important?

It's one of Brazil's most spectacular natural features and there are three million different species of plants and animals there.

One million indigenous people and tribes also live in the Amazon. 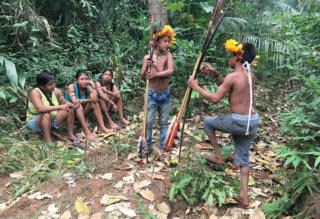 One million indigenous people live in the forest

Rainforests are sometimes called the lungs of the planet because they absorb carbon dioxide - a greenhouse gas which scientists think help cause rising global temperatures - and produce oxygen, which all animals need for survival.

They are seen as one of the best tools against climate change.

Why is the forest being cleared? 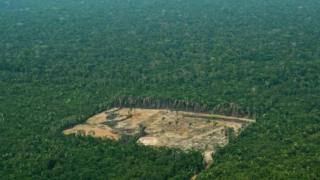 Forest has been cleared throughout human history for farming, but near the end of the 20th Century it began to be cleared on a much bigger scale for mass agriculture.

The timber is cleared by loggers and either sold or burnt, and the land is then prepared for farming.

When Brazil's President Jair Bolsonaro was running for election he made promises to reverse many environmental policies, which had been put in place to protect the forest. 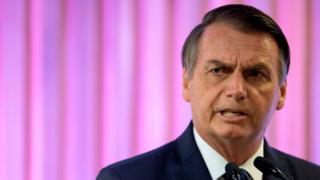 He was supported by agricultural businesses and small farmers, many of whom believe that too much of the Amazon region is protected.

Farming organisations have argued that the network of protected areas of forest is not helpful for a developing country that needs to create jobs.

Why is clearing the rainforest bad? 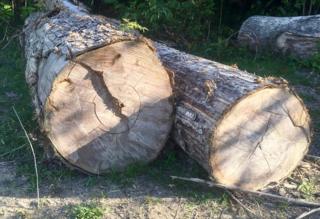 In one vast stretch of recently cleared land, giant trees were lying on their sides

Felling trees is bad news because we need them to absorb the carbon dioxide (CO2) produced by cars, factories and also by our own breathing.

If the amount of CO2 goes up, it affects what's called the greenhouse effect.

The greenhouse effect is the natural process when the atmosphere traps some of the Sun's energy, warming the Earth enough to support life.

But most scientists think that humans are speeding this process up through burning fossil fuels, and this means the planet is warming up too much and too quickly.

That's what they call global warming.

Images of climate protests from around the world