US Mexico border: Migrant children sent back to centre in Texas 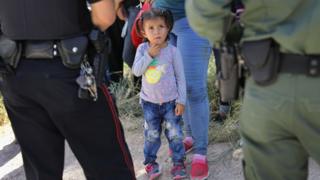 More than 100 children have been returned to a border centre in Texas in the US, just one day after around 250 youngsters were initially transferred away from it.

The children are in centres like this because - together with parents or family members - they had been trying to cross the US-Mexico border illegally, but were stopped by officials.

After being stopped, many children were separated from the adults and kept in the centres while officials decided what to do with them. Many people are still in this situation.

Reports suggest that conditions in this particular centre in Texas - which more than 100 children have been made to return to - are very bad.

It is difficult for people to get access to see what it's like, but lawyers who managed to visit said that children were not being treated well at all in the overcrowded facility.

One lawyer said things were so bad and "shouldn't be happening in America".

More about the US-Mexico border

Why does Donald Trump want to build a wall along it?

The migrant caravan: Life in the camp

A statement from the border authorities said that "limited resources" meant they were not able to give the children the best care possible, and that the centres were not really designed to hold children.

The agency said it had moved children to centres that were more suitable for them as soon as space was available.

How these children are being treated and what should happen to them is causing big arguments between US politicians.

How did this situation happen?

US President Donald Trump's government announced a rule in May 2018 to prosecute adults trying to enter the US illegally. But the rule meant that lots of children were separated from their families.

The policy was heavily criticised by people who did not believe this was the right way to deal with these families in this situation. 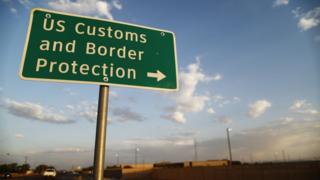 Getty Images
If people are caught trying to cross into the US illegally, they may be taken to centres while the government decides what to do with them

The policy was suspended, but despite a court order requiring families to be reunited and an end to these separations, hundreds of people are still being kept in government shelters.

What is being done to tackle the issue?

Politicians from the Democratic Party have been critical of how Mr Trump has dealt with the issue, and say he is not doing enough to help the children.

The Democrats are trying to secure rules that would ensure better healthcare and nutrition for children at the centres, and stop them from being kept at these sites for more than three months. 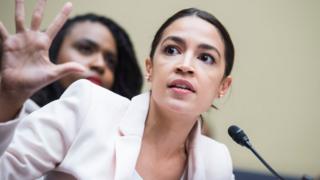 Democrats in the House of Representatives - one part of the US government that makes the laws - have approved $4.5bn (£3.5bn) in funding to help the situation on the border.

But this needs to be approved by the other part of the US government involved in law-making called the Senate, which is controlled by Mr Trump's Republican Party, so it may not be simple for them to do this.

It is thought the Republicans will want to introduce fewer restrictions on how the money could be spent, so that it could - for example - be spent on building a physical barrier along the border.

But the Democrats only want the money to be spent on humanitarian aid.

For now, the disagreements continue, while officials work out what to do with those being held near the US-Mexico border.

US-Mexico border wall: Living with the wall - A Newsround special