Climate change: Thousands at Time is Now march in London

Thousands of school children have taken part in a protest march against climate change in Westminster, London on Wednesday.

Those taking part in the mass lobby - called the Time is Now - called for the government to address environmental issues, including plastic and air pollution and damage to natural habitats.

The march was organised by the Climate Coalition and Greener UK.

Both groups are made up of many organisations, which want to do something about climate change.

"What are you going to do about climate change?"

What is a mass lobby? 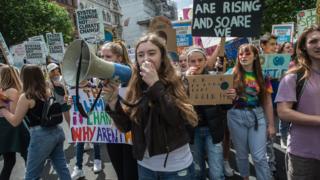 A mass lobby is when groups come together to get politicians to listen to what they have to say about a particular issue.

The UK has Members of Parliament (MPs) who are voted into Parliament through a process known as a general election.

These MPs make decisions on how the country is run and the laws we live by.

Each MP has a duty to represent the people who live in their local area, known as their constituents, who may come together in a mass lobby to try to get Parliament to take action on an issue they care about.

What else has been done to tackle climate change?

Environmental activist 16-year-old Greta Thunberg is very passionate about tackling climate change and wants governments to do more to tackle the problem.

The teenager from Sweden staged a School Strike for Climate in front of the Swedish Parliament in August 2018.

She has spoken at the UN Climate Talks in Poland and delivered a speech to UK MPs in April, in which she talked about the damaging effects climate issues could have on children and young people in the future.

Greta's strike has encouraged students from across the world to join her #FridaysforFuture demonstrations.

A number of students skipped school to take part in protests against climate change in February.

Demonstrations took place across the UK in places including London, Bristol, Cornwall and the Scottish Highlands, organised by youth climate change groups.

A group called the Extinction Rebellion has also held demonstrations against climate change this year.

Protests took place in London and police arrested more than 1,000 people following some disruptions to travel in the city.

Climate change: Have you changed your parents minds about it?