England are through to quarter-finals of the Women's World Cup after beating Cameroon 3-0 in a controversial match.

Goals from Steph Houghton, Ellen White and Alex Greenwood sent the Lionesses through to face Norway on Thursday.

However, the game will be remembered for Cameroon's behaviour after two Video Assistant Referee (VAR) decisions went against them.

In extraordinary circumstances, the Cameroon players appeared to refuse to restart the match on two occasions.

More on the Women's World Cup 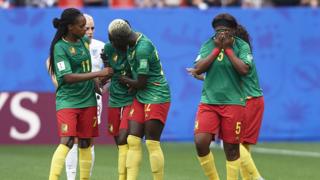 England took the lead in the game through captain Steph Houghton's clever free kick in the Cameroon box.

Her goal was initially ruled out for offside but the video assistant referee overruled the decision.

Cameroon reacted furiously and pointed to suggest the big screen's replays showed that White was offside. 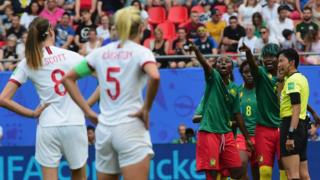 They were further angered when they thought they'd got a goal back through Ajara Nchout but it was again ruled out for offside after another VAR decision.

Cameroon were lucky to finish the game with all of their players still on the pitch after a bad tackle from Alexandra Takounda on Houghton left the England player needing treatment.

After the match, England manager Phil Neville said he was ashamed by Cameroon's behaviour.

"It didn't feel like football. It was a good win but that wasn't a World Cup last-16 tie in terms of behaviour that I want to see from footballers", he said.

His interview came after the Cameroon players refused to re-start the game after Ellen White's VAR-awarded second goal.

There were also several bad challenges that Neville said had no place in a World Cup match.

"My players kept their concentration fantastically, but those images are going out worldwide about how to act, the young girls playing all over the world that are seeing that behaviour. For me, it's not right", he said. 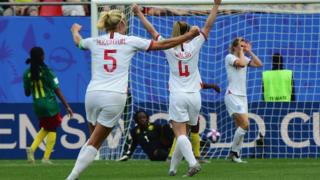 England will play Norway in the quarter-final of the World Cup on Thursday at 8pm.

Norway beat Australia on penalties after a 1-1 draw to reach this stage.

Whoever makes it to the semi-final will play either France or the USA for a chance to make it into the World Cup final.

England, who reached the semi-finals of their past two major tournaments, are the fourth favourites to lift the title in Lyon on 7 July.

Africa Cup of Nations: Seven stars to watch out for