UK set to be invaded by 'killer' Asian hornets 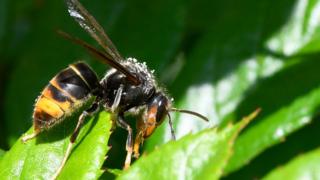 Eighty Asian hornets have been spotted this year on Jersey, a self-governed island in the middle of the English channel,

People are worried that this means there might be an invasion of Asian hornets coming to the UK.

Asian hornets are very unpopular as they are a danger to the UK's bee population. Hornets are able to eat up to 50 honey bees in a day.

Honey bees are vital for plant pollination, and they are currently under threat in many areas in the UK.

Why are bees so important? 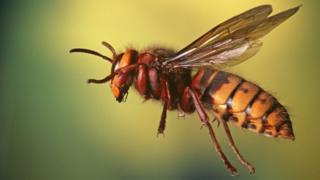 In 2018, only four Asian hornets were spotted in Jersey compared to the 80 sightings this year.

With so many sightings, it is thought that they might be heading to the UK soon.

Alistair Christie, who is keeping track of Asian hornets in Jersey, has some advice on how to identify the species and what to do if you spot one.

The hornets are thought to originally have come from France after they were accidentally brought there in 2004. 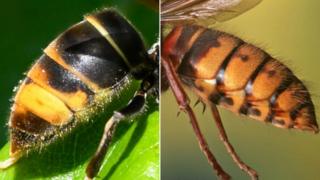 Getty Images
Can you spot the difference between these hornet bottoms? An Asian hornet on the left, and a native UK hornet on the right

You can tell the difference between a native hornet, that originally comes from the UK, and an Asian hornet by looking at the bottom halves of their bodies - the abdomen.

Whereas hornets native to the UK have more patterned abdomens - you can usually see spots of black like in the one above and more yellow.

Asian hornets are also a bit smaller than native hornets.

What do you do if you spot one?

So far, there have been no recent reported sightings on the UK mainland. But it is important to stay aware.

They will sting if they think they are under threat, which is why it's very important that you don't go near an Asian hornet if you spot one.

If you do happen to see one, do not panic. Try to stay calm and walk slowly away, you can crouch down for more protection.

They are sometimes attracted by fast movements, so running away might not be a good idea!

Anyone allergic to stings from bees and wasps may also be allergic to hornet stings, so make sure to stay safe. 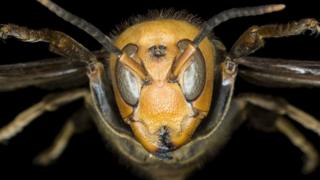 If you are at a safe distance, try to take a picture of the hornet and share it with the Non Native Species Secretariat.

You can include other details, such as where you saw the hornet and how many there were.

The National Bee Unit advises "even if you are unsure of whether it is an Asian hornet, send it in anyway - it's better to be safe than sorry."

Record number of migrant children arriving in UK by themselves