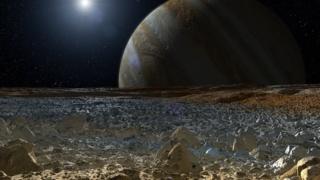 A giant ocean on one of Jupiter's moons contains salt - the kind you'd put on your fish and chips!

According to scientists, the Hubble telescope has been spying on the moon called Europa for quite some time and has identified the presence of sodium chloride - otherwise known as table salt.

Researchers say it could mean that Europa's oceans are hydrothermally active, which means having volcanic activity.

You can see Jupiter this month - with just binoculars!

That is exciting because it increases the chance of there being signs of extra-terrestrial life on the moon.

On Earth, life is often thought to start near hydrothermal vents.

US space agency Nasa is about to send probes to the moon - with the first mission due to take off in 2023. Until then, the only time scientists have viewed the moon up close was back in the late 1990s and early 2000s - thanks to a spacecraft called Galileo. 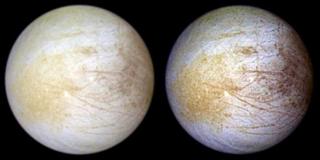 The salt appeared most often near the patterns of ice and ridges that criss-cross the surface.

Professor Mike Brown, from the California Institute of Technology, said: "We have had the capacity to do this analysis with the Hubble Space Telescope for the past 20 years. It is just nobody thought to look."

Perhaps in the future you'll be putting salt on your dinner that comes from another world.

Nasa finds Star Trek logo on the surface of Mars

Fish and chips: Cod and haddock under threat from climate change