Compostable trainers made completely of plants If you care about the environment and still want to look fly in some nice kicks then these new trainers may be for you.

The world's first ever 100% compostable, organic trainers have just been released by a Canadian shoe company.

The Plant Shoe is made entirely from plants including pineapple and cotton so you can literally have a greener footprint.

It's important because Americans alone throw away at least 300 million pairs of shoes each year, which end up in landfills, trainers are even worse because they are usually made up of largely plastic or chemically-treated material that make them impossible to break down.

The trainer is completely biodegradable which means when you're done with them you could drop them in the compost and they will rot away to nothing.

The pineapple used in the shoes are from the Philippines, where the pineapple husks are saved from being thrown away and transformed into sustainable cloth.

Creative Director, Mike Belgue said: "It's funny, none of our materials are particularly ground-breaking, and in some guise (maybe with a bit of tweaking), they've been around for a long time. No one previously has looked to the past to solve for the future. ​ We used very old techniques, using old materials, and figured out a way to make them all work for a modern sneaker." 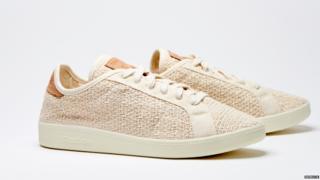 It's not the first time trainer companies have tried to be more environmentally smart, last year Reebok released their plant based shoe called the NPC UK Cotton + Corn sneaker.

The trainer even comes in recycled packaging, and none of the materials are dyed.

In 2017, the group developing the Cotton + Corn initiative announced that they were working on creating the first-ever compostable shoe but have not got there yet even though their new corn trainer seems to be a step in that direction.

Plastic: The football pitch made from recycled cups