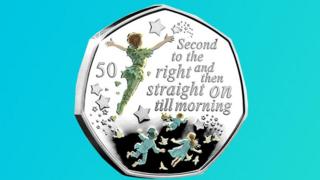 There's a new set of 50p coins featuring characters from Peter Pan including Tinkerbell, Hook and Peter Pan himself.

The coins have been released in partnership with Great Ormond Street Children's Hospital (GOSH) and mark the 90th anniversary of Peter Pan author JM Barrie gifting the rights to the books to the hospital.

Six coins have been created, and each one features a different quote and character from the book, including Peter Pan, Captain Hook, Tick-Tock the Crocodile, Tinkerbell, Wendy and Nana.

The coins have not been released by the Royal Mint, but The Westminster Collective which produces collectible coins, because of this they are known as British Isles coins and cannot be used as payment.

Penny for your thoughts?

Prices for the coins start at £6.25, and for every coin sold, a donation will go directly to GOSH Charity to support the hospital's most urgent needs: fund support services, pioneering research, equipment and refurbishment.

What is the connection between Peter Pan and Great Ormond Street Hospital? 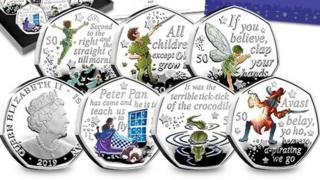 Peter Pan, the boy who never grew up - and his adventures with Tinkerbell, Wendy and the lost boys - was first a play and was then published as a book called Peter and Wendy in 1911.

JM Barrie, who wrote Peter Pan, was a huge supporter of Great Ormond Street Hospital and, in 1929, he gave the hospital the rights to Peter Pan.

Copyright is the right a person gets when they make something creative. Every time a piece of music or book is used, the owner of the rights often gets a payment called a royalty payment.

Peter Pan was already really successful in 1929 so the rights to the book was a really generous gift. From then on, the hospital received royalty payments every time a production of the play was on, as well as from the sale of Peter Pan books and other products.

Usually, the rights of books are made public after 50 years and can only be extended 20 years after that, but the House of Lords made an exception for the hospital and now GOSH has the rights forever.

Barrie explained the gift by saying: "At one time, Peter Pan was an invalid in the hospital… and it was he who put me up to the little thing I did."

Gruffalo gets his own coin to mark 20th birthday

Send in: Sports day with a twist!

What books have you been reading?