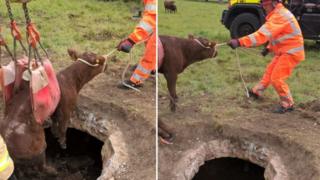 KentFireandRescue
Firefighters had to widen the hole to make room for a mechanical hoist to be lowered in, but both calves were winched-out safely.

Fire fighters in Maidstone were first on the scene for "operation bovine bail-out" on Sunday!

Two calves had to be rescued by the Kent fire and animal rescue unit after falling five feet into an old drainage hole on a farm.

The cover over the hole gave way, plunging the cows about 1.5metres underground.

Don't worry - they were not in any further danger and both were safely recovered using hoisting equipment, picking up just minor grazes.

Ready for some quality cow puns from Kent Fire and Rescue? In a statemen the rescue team said

"They were udderly thrilled to be reunited with their mother, who looked on throughout the rescue," said a statement.

"She was over the moooon to have them back"!