The first archaeological artefacts have been found during the search for lost prehistoric settlements in the North Sea.

Scientists investigating a Stone Age landscape at the bottom of the North Sea have found evidence of tools which show for the first time humans lived in that area.

It's believed there were people living by the water and the area was swallowed up by the sea in around 6000 BC.

The 11-day expedition by European scientists from Belgium and Britain explored three sites in the North sea hoping to find evidence of Stone Age settlement sites. 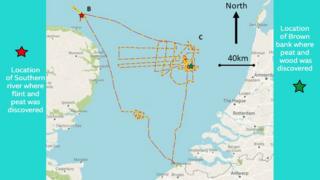 Over many years, fishermen have found prehistoric artefacts. So it has been suspected for a long time that the North sea hides a vast landscape which was once home to thousands of people.

Scotland has its own meteorite crater!

Scientists have discovered an ancient type of panda 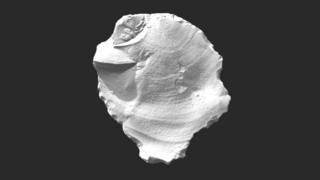 Tom Sparrow, University of Bradford
An image of the flint discovered in the North Sea

The first was a small piece of flint which was possibly the waste product of stone tool making. The second was a larger piece, broken from the edge of a stone hammer, which would have been used to make other flint tools.

The scientists also found several large samples of peat and ancient wood, which they think probably means a prehistoric woodland once stood the area.

A new dinosaur species has been found in an Australian town

Scotland may have its very own meteorite crater!