UK weather: Flood alerts, sinkholes and a lot of rain 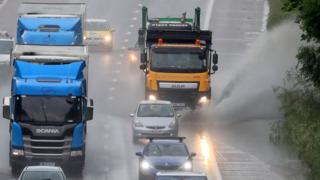 PA / Gareth Fuller
Drivers have been warned about surface water

Forecasters are predicting a month's worth of rain to fall today.

The bad weather is already causing problems. Two sinkholes have appeared on the M25, a major motorway near London meaning Police had to close parts of the road in both directions.

A total of 31 flood alerts are in place across the country, with some areas set to see up to 60mm of rain, particularly over the first half of the day.

June is now likely to be the wettest on record, with yellow weather warnings issued for the coming week.

Snow forecast: What is a weather warning?

Sinkhole trashes sports ground - but what is a sinkhole?!

Weather warnings remain in place for most of Tuesday, with forecasters predicting parts of the UK could get more than 100mm of rain this week.

National Rail has warned that some trains will be affected.

The Environment Agency has issued three flood warnings in south-east England, for the River Wandle at Morden, south London, the Emm Brook at Wokingham and Ravensbourne at Bromley.

Why has it been so wet recently and when will it stop raining?

How well do you know your weird weather?