How to see Jupiter's moons this month with your binoculars 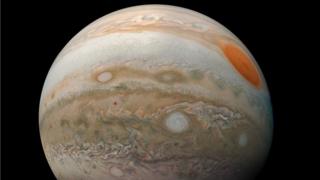 Look to the night skies this month and you might just see something amazing - and you may only need a pair of binoculars to do it!

That's because Jupiter is passing closer to the Earth than usual in June, and will be visible in the night sky from dusk until dawn.

It's part of a yearly event where Jupiter, Earth and the Sun all line up in row.

Nasa has said that during peak time on a clear night, you should be able to see Jupiter's four biggest moons just with a pair of binoculars.

The best time to view the planet, which has 79 moons in total, will be the night of 10 June.

The space agency also advises that you should head to an area that doesn't have a lot of buildings or street lights, which might interfere with your view.

Mysterious sparkly flashes on the Moon

How do we know the Earth is four billion years old?

It's not the first time that Jupiter has made the news recently.

Just last month, we reported how the red spot on the planet is getting smaller, with scientists believing that it could vanish forever within the next 20 years.

The red spot is in fact a big storm. Experts don't know exactly why it's getting smaller, but it's been suggested that the storm is gradually declining.

When Jupiter 'kissed' the Moon

Ocean found under the surface of Jupiter's moon