A gaggle, a confusion and a conspiracy - bizarre animal collective group names 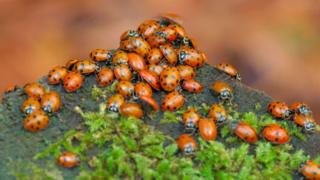 A huge group of ladybirds has caused weather experts in San Diego, USA, to be very confused.

A giant cloud appeared on the NWS weather satellite, but after a bit of investigation it turned out to be a 'bloom' or a group, of ladybirds.

Thousands of the little red and black insects took flight at the same time, and the bloom stretched for 10 miles before they landed.

This got us thinking about some other unusual names for groups of animals. Keep reading below to find out a few of our favourites.

Where did these names come from?

A parliament of owls 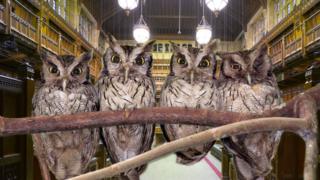 Getty Images
I say! What a hoot! Hear, hear! T-wit t-what?! Owls are considered to be quite wise

A group of owls is called a parliament.

This could be because owls are typically considered to be quite intelligent and wise.

In ancient Greek mythology, the owl was seen to accompany or represent Athena, the goddess of wisdom.

A confusion of wildebeest 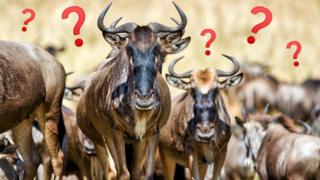 Getty Images
What was that? Huge numbers of wildebeest take part in The Great Migration each year

A group of wildebeest is called a confusion.

Wildebeest are native to Africa and every year they have a giant migration, where around two million of them join together to search for greener areas.

The reason why they are called a confusion could be due to the noise and confusion that happens when all the animals get together to migrate.

A conspiracy of lemurs 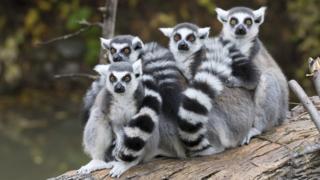 Getty Images
Let's work together! Lemurs are quite social and work together as a team to defend themselves from predators

A group of lemurs is called a conspiracy.

Lemurs are social animals and live in mini communities of around 10-25 members.

As a result of this, they often work together, or 'conspire' to outwit predators using a technique called 'mobbing'.

A gaggle of geese 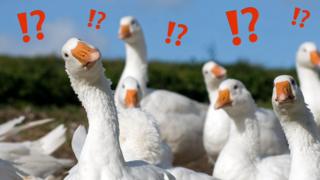 Getty Images
What did you say?! Geese can get quite noisy when they join together in a group

A group of geese is called a gaggle.

This is because when geese get together they can get quite noisy and rowdy.

A dazzle of zebras 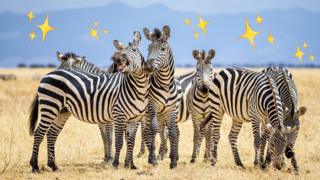 Getty Images
Aren't we dazzling?! Zebras might use their stripes to confuse predators

A group of zebras can be called a dazzle.

Some zoologists think zebras use their stripes as camouflage when they're together in a big group to confuse predators - by making it harder to pick out individual zebras.

Zebras can also be called a herd or a zeal.

A bloat of hippos 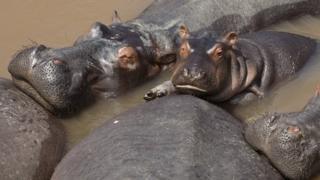 A group of hippos is called a bloat.

Hippopotamuses tend to live in groups of around 10-20 female hippos, with one male hippo.

The reason they are called a bloat could have something to do with their large bloated bellies.

A tower of giraffes 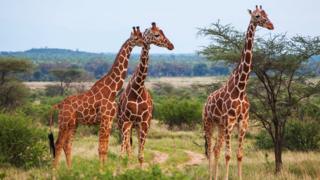 Getty Images
Ooh look over there! When it comes to height, giraffes 'tower' over the competition

A group of giraffes is called a tower.

These amazing animals can be found in the African plains, and they use their long necks to reach leaves on the tops of trees.

It's their long necks which helped give them their group name, as they are so tall they tower over bushes and other animals!

A skulk of foxes 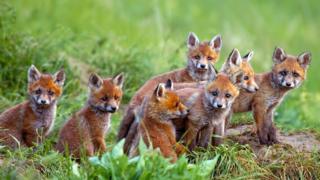 Getty Images
Everyone let's be quiet! A group of foxes is called a skulk

A group of foxes is called a skulk.

The word skulk comes from a Scandinavian word, and generally means to wait, lurk or move stealthily.

Foxes have a bit of a reputation for being sneaky so this word seems to work quite well!

A destruction of wild cats 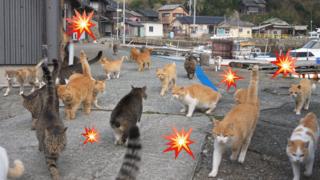 Getty Images
Meow! Groups of wild cats can get quite fiesty

A group of wild cats is called a destruction.

Wild or feral cats, who don't live with humans, can be quite territorial and may fight to protect what is theirs.

For this reason when a group of wild cats get together, they can sometimes be quite destructive.