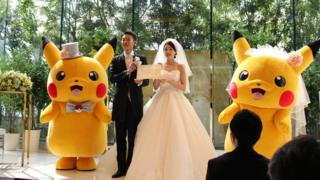 When people get married, they often describe it as the best day of their lives.

But what could make that day even better? A Pokémon wedding with a giant Pikachu in a top hat!

In Japan, ESCRIT, a company specialising in wedding ceremonies, has joined forces with the Pokémon Company to offer official weddings based on the popular video game.

Pokémon was created in 1996 with a Nintendo GameBoy video game and TV cartoon series.

Imagine Pokemon running around in England

Both relied on the same idea of exploring the Pokémon world, and catching and battling little pocket monsters.

Since then Pokémon has become a global phenomenon inspiring birthday parties, conventions, and now weddings.

So what does a Pokémon wedding involve? 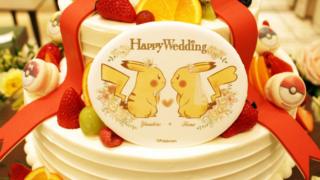 Guests at a Pokémon wedding can expect to see the happy couple accompanied by two giant Pikachus - one male and one female.

Not only that, people will get to try some Pokémon-inspired wedding food, including some extravagant deserts. 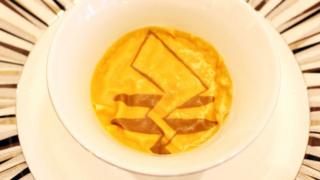 The Pokemon Company
We think this is custard, but it could be yellow soup. That's definitely Pikachu's tail though!

There is also, most importantly, a Pokémon wedding cake. It's decorated with Pokéball macaroons and even more images of Pikachu.

Oh, and there's also an official wedding certificate, because who doesn't want such an important legally-binding document covered in Pokémon! 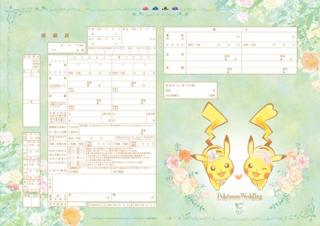 Unfortunately, these official Pokémon weddings are only available in Japan at the moment, so it might be a while before you get to attend one in the UK.