D-Day: What is it and why is it important? 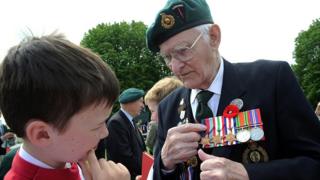 It has been 77 years since the D-Day landings, which took place on 6 June 1944 during World War Two.

The landings marked the start of the campaign to free north-west Europe from the Nazis.

It was a very important moment during the war, but there are lots of people who don't know much about the day, or why it's so significant. A 2019 YouGov survey revealed that half of Britons don't actually know what D-Day is.

The survey, carried out alongside RUSI (a group who research the military and defence issues), asked people to pick which sentence best describes D-Day.

Of the people surveyed, 49% picked the right answer - 'The beginning of the Allied liberation of Europe' - but the rest picked another event that happened during the war or selected the 'Don't know' option.

Find out more about what happened on D-Day and why it was so important. 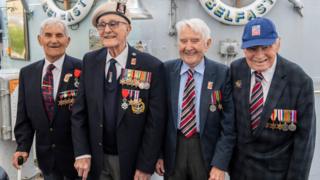 Getty Images
These veterans all served on D-Day
What was D-Day?

The D-Day landings in 1944 were the biggest invasion by sea in history. It's a key date in the story of WW2.

The landings took place on 6 June after five years of war with Germany, who were led by the Nazis. The whole operation was codenamed Operation Overlord.

A massive military force set out from the UK towards France.

The plan was to overthrow Nazi Germany and its leader Adolf Hitler. At the time, the Nazis had taken over nearly the whole of Europe.

The Allied forces, which were made up of soldiers from many countries, including the UK, the USA and places like Canada and Australia, landed on the beaches of Normandy in France, and started to break through the German army's defences.

They began an attack that lasted for eleven months and took them all the way to the German capital Berlin, to the bunker that was Adolf Hitler's headquarters. 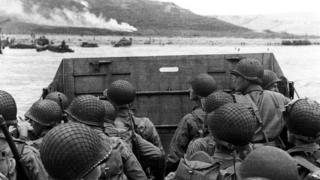 Reuters
US army troops landing on the beach in Normandy for D-Day
What happened on D-Day?

The attack began when Allied planes and warships bombarded German positions along the coastline. This was to damage the defences making it easier for the troops to get ashore.

At the same time, planes and gliders dropped tens of thousands of allied soldiers behind the German defences. They took control of important roads and bridges. This made it harder for the German army to rush extra men towards areas where the troops were landing. 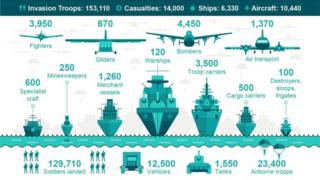 Thousands of ships had set out from the south coast of England to help. In all, over 6,000 vessels joined the attack. They were supported by over 11,000 planes. The naval force crossed the channel overnight.

At 6.30am on 6 June, troops started to land on the beaches of Normandy in France.

By the end of D-Day, the Allies had put 156,000 troops ashore. Portsmouth's D-Day Museum says an estimated 2,500 Allied troops died on the day of the invasion.

Where did D-Day landings happen?

The Allied troops landed on beaches along an 80km stretch of the Normandy coastline, in the north of France.

It's not the nearest part of France to the UK. It was chosen because Hitler was expecting the invasion force to cross the English channel at its narrowest point. 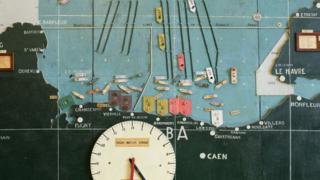 By making a longer sea voyage, the soldiers avoided some of the heaviest coastal defences.

Who took part in D-Day landings?

The majority of troops who landed on the D-Day beaches were from the UK, Canada and the US. 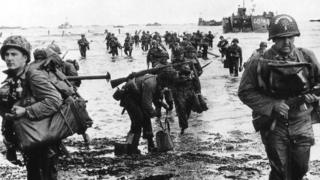 Reuters
US reinforcements land on Omaha beach during the Normandy D-Day landings near Vierville-sur-Mer, France, on 6 June 1944

However, troops from many other countries participated in D-Day, and the Battle of Normandy, in all the different armed services from Australia, Belgium, Czechoslovakia, France, Greece, the Netherlands, New Zealand, Norway and Poland.

Why was it called D-Day?

The 'D' in D-Day does not stand for anything, it's just a name the military use when planning an event. 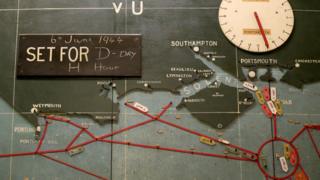 Getty Images
Detail of the the original D-Day Planning Map in the drawing room of Southwick House, which in June 1944 was the headquarters of Supreme Allied Commander, General Dwight D. Eisenhower

The military started planning the details of the invasion before they knew the date when it would take place. In order to organise things like when the troop ships should leave England, they referred to it as D-Day.

The name D-Day has been used for many military operations, but it is now firmly associated with the Allied invasion of Normandy. 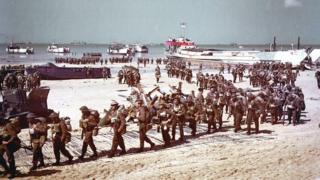 Getty Images
Colour has been added to this photograph, showing British troops on Juno Beach in 1944