Plastic waste: Why Malaysia sending tonnes of plastic back to the UK 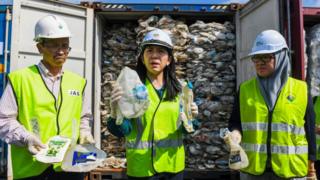 Do you know where your family's rubbish goes? What about the plastic you put in your recycling bins?

Did you know that much of the plastic waste we send to be recycled, is actually sent overseas?

Now, the Malaysian Environment Minister has taken a strong stand against this process.

Yeo Bee Yin has said she has ordered several thousand tonnes of imported plastic waste to be sent back to the countries it came from - including the UK.

She says the country has become a "dumping ground for wealthier nations" and that much of the refuse was imported illegally. 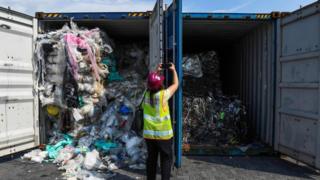 Getty Images
Why do we ship our rubbish overseas?

When countries send plastic overseas, it is assumed the recipients will recycle it into something else or dispose of it responsibly.

But many of these countries including Malaysia say they are receiving more plastic than they can properly dispose of and some of it is low-grade, which means it's a plastic that can't be recycled, so ends up on illegal landfill sites.

Three years ago, the UK was sending half a million tonnes of plastic to China and Hong Kong.

But after China put restrictions on plastic being shipped to them, it has been a lot harder for countries like the UK, Australia and America to send their waste to them.

There are also some illegal recycling companies in Malaysia who have been seen burning plastic in the open - leading to environmental harm.

Plastic waste and what to do with it is becoming a big problem.

A report by the United Nations Environment Programme in 2017 reported it was common for mixed plastic waste, including plastics that can't be recycled, to be concealed "as clean plastic scrap".

Environmental campaigners are calling for stricter rules to be placed on plastic importers before they are allowed to bring plastic waste into the country.

'Girls need more female role models to get into F1'