Periods: It's really helpful to talk about them, says charity 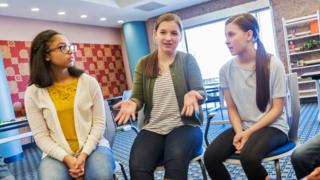 It's really important that girls are able to talk about periods, says a children's charity. It comes after new research suggests that there are lots of girls who find it hard to do so.

Plan International UK told Newsround that it wants to stop girls and young women from feeling confused, embarrassed or uncomfortable talking about them.

Periods are a normal part of growing up for girls. They form part of a process called puberty, which is when our bodies change and develop as we move from being children into adults.

Lucy Russell - Head of Girls' Rights and Youth at the charity - told Newsround that even though periods are a completely normal part of growing up for girls, many can feel uncomfortable talking about them.

"A lot of people feel they are embarrassing or secret and don't talk about them," she said.

Find out more about coping with changes in your body

"Periods start at puberty so it's really helpful for us to talk about them even before they start, so that every girl who starts her period knows what is happening, knows she is healthy and normal and understands her body," she said.

According to the NHS, 11 years old is the average age for puberty to start in girls. Monthly periods then usually begin at around the age of 12, but some girls will start to have them later on.

The guidance from the charity around speaking about periods comes after a Plan International UK survey suggested that one in five girls and young women can be teased about their periods and many say that they don't want to speak to anyone about it.

Lucy explained that some girls may feel that periods are "embarrassing or secret" or even "make up stories" about them, but the charity wants this to change.

"It just causes problems," she says. "Not talking about periods means not understanding a healthy part of your body, and that can leave girls feeling confused, embarrassed or ashamed. We want to stop that." 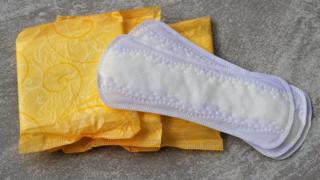 Getty Images
Lucy told Newsround that she believes it's really important that products girls may need during their periods (such as sanitary towels, seen in this photograph, which may also be called 'pads') are available in schools

So what can be done to help? Lucy told Newsround that a lot more could be done in schools.

This is after the results showed that two in every three girls who were being teased about something to do with their period said that it happened at school.

"Schools can play a huge role in improving this situation," she said. "They can deliver good quality relationships and education lessons so all of us - boys and girls - understand about periods and know they are healthy and normal.

"Schools can make sure that period products are easy to ask for and get for anyone who needs them, any time. Toilets should be set up so that it's easy to use them on your period, and all teachers should be trained to be positive about periods. If someone asks to go to the toilet because they are on their period, they should be able to go."

If you or anyone you know has questions or worries about anything that you have read in this article, speak to an adult that you trust you about it. That might be a teacher or someone in your family.