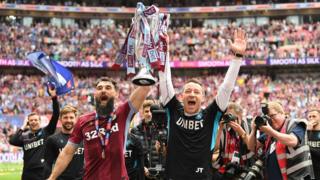 Aston Villa are back in the Premier League after beating Derby County 2-1 in the Championship play-off final at Wembley Stadium on Monday.

Anwar El Ghazi scored in the first half, with John McGinn putting them 2-0 up with 30 minutes to go.

Jack Marriott's strike in the 81st minute, which was deflected by Martyn Waghorn, got a goal back.

But even with seven minutes of injury time, Frank Lampard's Derby couldn't force an equaliser.

Scottish Cup: Celtic win the treble for the third time

Do you know the original rules of football?

The match is described as the most valuable in football, with Aston Villa's victory set to earn them £170 million, thanks to the enormous amount of money that people pay to broadcast Premier League matches around the world.

The Championship play-off final is a match held at the end of every season and decides the third team to be promoted into the English Premier League. 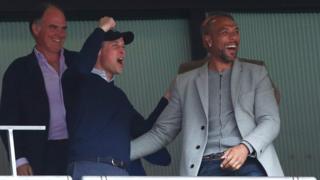 AFP/Getty Images
Prince William, who famously supports Aston Villa, was seen celebrating during the match when his team scored the first goal

The winners of that game face each other in the final at Wembley with the side that's victorious earning promotion to the Premier League.

To give you an idea of how much the game is worth, the winners of the Champions League receive around £45 million, so it's a hugely valuable game to win. 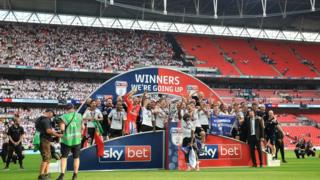 Getty Images
Fulham won the play-offs in 2018... but only lasted a single season in the Premier League after suffering relegation.

After their victory, not only will Aston Villa enjoy the status of playing in one of the richest league's in the world, the EPL is also highly competitive, boasting some of the top teams in Europe.

Unfortunately for Derby, they must play another campaign in the Championship and hope for promotion next season.