Lionesses win in friendly against Denmark 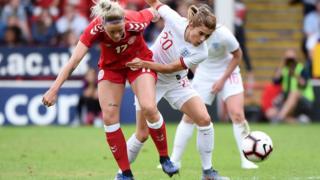 The Lionesses achieved a "messy" win according to their manager Phil Neville in their friendly match against Denmark.

The England team won 2-0, but their manager said he was "bored" watching the first half of the game.

He said the team were struggling because they had had a busy week and a lack of sleep from a night of camping.

But for England fans there was delight at the team's win ahead of the start of the World Cup in June.

Who are the England stars playing abroad? 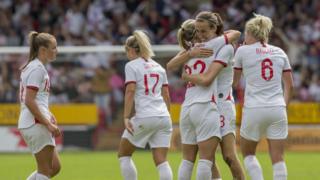 A goal from Nikita Parris at the very end of the first half perked the team up. Captain Jill Scott then headed home in the second half.

This was their second-to-last friendly before the World Cup. They will face New Zealand next Saturday.

But the real test will come in their first game against Scotland on 9 June as part of the World Cup.

This year the tournament will be taking place in France, and sees teams from all over the world compete.

Women's World Cup: The Lionesses have been announced!

Fifa Women's World Cup 2019: We catch up with the Lionesses' Alex Greenwood