Judith Kerr: Tributes pour in for The Tiger Who Came To Tea author 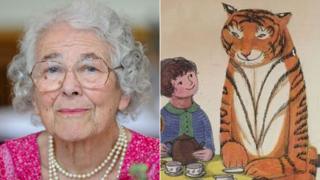 Tributes have been pouring in for children's author Judith Kerr, who has died at the age of 95.

The writer was most famous for creating the books 'The Tiger Who Came To Tea', which has sold over five million copies, and 'Mog'.

Kerr, who published more than 30 books over a 50-year career, dreamed up the tiger to entertain her two children.

As a child growing in Germany, Kerr was forced to flee with her Jewish parents when Adolf Hitler came to power. 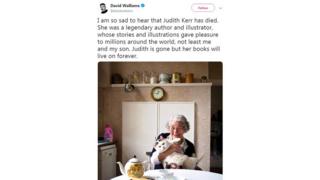 Britain's most popular children's author, David Walliams, tweeted a glowing tribute: "She was a legendary author and illustrator, whose stories and illustrations gave pleasure to millions around the world, not least me and my son. Judith is gone but her books will live on forever."

Charlie and Lola author Lauren Child said she was a "huge admirer of her work, as a writer and an illustrator".

Philip Pullman, author of His Dark Materials series, tweeted: "RIP Judith Kerr. She was a lovely person, a creator of delight, and her life is a reminder of why Europe is and should be one place, our home."

How to write a great book, with Children's Laureate Lauren Child