Adrian Pope, 45 Aid Society
Seven survivors of the Holocaust, along with their relatives, have returned to a square in Prague where they had their photo taken as children in August 1945

A group of Holocaust survivors have travelled to Prague to recreate a photo that was taken of them back in August 1945, when they were just children.

The original photo - known as 'The Boys' - shows 732 children who survived the Holocaust, but who lost their parents.

This is the original picture... 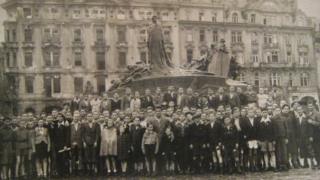 The group of 732 survivors became known as 'The Boys', even though there were in fact 80 girls in the group as well.

They were photographed next to the Jan Hus Memorial in Old Town Square in Prague, Czech Republic, where the memorial still stands to this day. 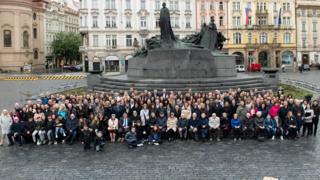 Adrian Pope
This is the recreation of the photo from 1945, featuring seven of the Holocaust survivors from the original photo, plus their relatives

It features around 250 people - seven of whom appeared in the original picture as young children and who are now in their 80s and 90s.

After 'The Boys' was taken, the youngsters were flown to the UK on RAF planes from Prague to start new lives in Britain, beginning at a hostel near Windermere in the Lake District

After World War Two, the British government had agreed to allow 1,000 orphaned child survivors of the Nazi concentration camps into the UK, but only 732 could be found.

One of the children said: "We came from hell to paradise."

The children stayed in touch with each other throughout their lives and reunited in the exact spot where they gathered 74 years ago having survived World War Two.

While on this return visit to Prague, the group made an emotional trip to Theresienstadt concentration camp, from where many of 'The Boys' had been liberated at the end of World War Two. A special dinner was also held to honour them.

From the original photograph, 20 survivors are still alive today living in different parts of the world.

The trip was organised by a group called the '45 Aid Society, which is a charity set up in 1963 by the survivors themselves in order to support each other.

It works to celebrate the survivors' history, remember their family members who were murdered in World War Two, and to teach future generations about the Holocaust and what we can learn from this terrible period in history.