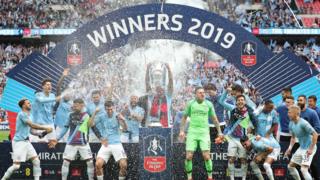 It was a day for breaking records as Manchester City thrashed Watford 6-0 in the FA Cup final.

Not only did City become the first team since 1903 to score six in the cup final, but they also became the first team ever to win a domestic treble of Premier League, League Cup and FA Cup trophies.

It was City's sixth FA Cup triumph and their first under manager Pep Guardiola, who has now won six trophies since taking over the club in 2016.

Here are five things we learned from the final.

It could have been very different 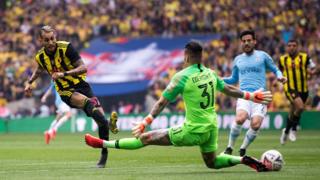 Watford had the early chances to completely change the course of the game.

Winger Roberto Pereyra was put through on goal with only the keeper to beat but City's Brazilian goalie, Ederson, stayed tall and kept the ball out.

Watford also thought they were denied a clear penalty. Abdoulaye Doucoure's shot appeared to strike the arm of Vincent Kompany.

Ultimately though, as soon as City scored their first goal through David Silva, Watford didn't get another look in.

Raheem Sterling is in the form of his life 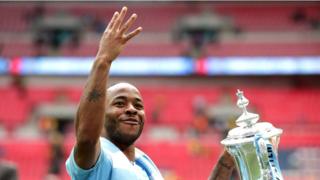 Whether or not he scored two or three goals on the day, Raheem Sterling is in the form of his life at the moment.

All of his goals came from within the six yard box - and there's still debate on whether he got the final touch on Gabriel Jesus's goal-bound strike in the 38th minute.

In total, Sterling has scored 26 goals this season - his best goal scoring run ever.

England fans will be hoping the 24-year-old takes his form into next month's Nation's League semi-final against the Netherlands. 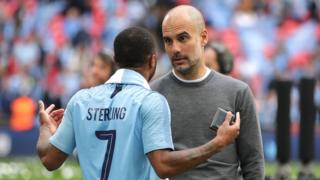 Is Pep Guardiola ever truly satisfied?

Moments after his side had won 6-0, making history in the process, Guardiola was seen on the pitch in a heated debate with Raheem Sterling.

Sterling cleared it all up on Twitter later on, explaining that Pep was simply telling him not to steal goals. 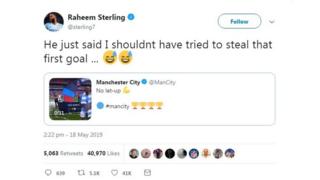 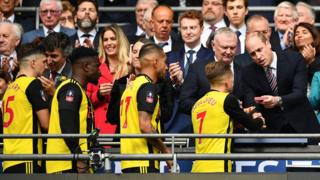 Just four years ago Watford were playing the likes of Blackpool, Ipswich and Rotherham in the Championship.

There have been nine managerial appointments in the past seven years.

But, in Javi Gracia, they've finally found some stability this season.

They've made it to an FA Cup final and in finishing 9th place in the Premier League, they've recorded their highest points tally ever - 50 points.

Watford will be hoping they can keep hold of Gracia, and some of their best players, as they attempt to build on one of their best season's ever next year.

Are City one of the best teams of all time? 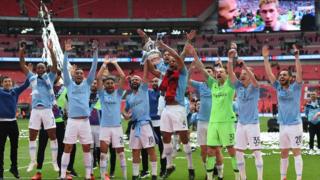 Manchester City are the first side to ever win the Premier League, the League Cup and the FA Cup in one season.

Their 98 points in the league is the second highest ever total ever in Premier League - bettered only by the 100 points they achieved last season.

City have also scored more goals than any English top-flight team in a season. They have managed 163 in all competitions.

They are also the first English top-flight side to register 50 wins in all competitions in a single season.