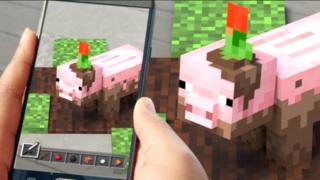 Minecraft has revealed a new AR game called Minecraft Earth, and a date for Minecon Earth 2019.

The game uses Augmented Reality, the same type of technology that Pokemon Go uses, which means players can see characters from the Minecraft world in the real world using their phone or tablet.

Minecraft Earth has been revealed as part of Minecraft's 10th birthday celebrations.

Makers Mojang have said that players will be able to work with friends to create small and large builds in their neighbourhood, and team up to take on challenges and mini-adventures.

Minecon is a big live event, which celebrates all things Minecraft, including special guests and big game reveals.

It's been running since 2010 in different places around the world. 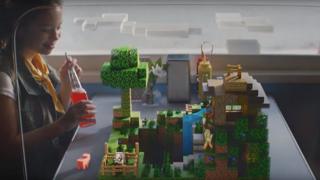 MINECRAFT/MOJANG/MICROSOFT
Using Augmented Reality, players will be able to build houses and cities in the 'real world'

However since 2017 the event has been hosted live online, so that everyone gets a chance to watch it.

The event normally lasts about 90 minutes.

This year it will take place 28 September.