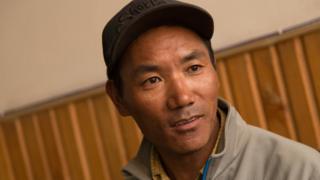 A man from Nepal has become the first person to climb Mount Everest a staggering 23 times!

Mountaineer Kami Rita Sherpa, who is 49, managed to reach the summit of the tallest mountain in the world on Tuesday.

He works as a guide for foreign mountaineers attempting to climb the Himalayan peak and is known for his endurance and experience at high altitudes.

Preparing to climb Everest takes a lot of training - up to two years is recommended to make sure you're fit enough.

This includes climbing other mountains, as well as more common exercises such as running (wearing a heavy rucksack) and weight training.

Everest - the world's tallest mountain... or is it?

Mountaineer Alan Hinkes is the first Briton to conquer all 14 of the world's highest mountains, including Everest.

He told Newsround: "It's best to gain climbing experience, develop your stamina and learn skills such as how to use an ice axe and crampons."

Alan says that when you get to Everest base camp, you have to spend around four weeks "acclimatising" - that's getting used to the extreme altitude.

The base camp is 5,300m above sea level, so the air is much thinner. There's less oxygen, which makes it harder to breathe.

During this time, climbers gradually do longer and longer climbs from base camp, before going for the summit.