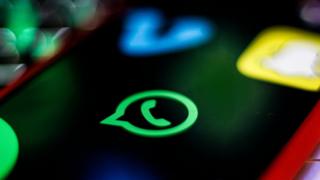 Getty Images
WhatsApp has 1.5bn users, but it believed the attacks were highly-targeted to specific individuals

WhatsApp is urging users to update their apps after the messaging service was hacked.

The hackers remotely installed surveillance software onto phones and other devices using a 'major vulnerability' or 'weakness' in the system.

The app which is owned by Facebook, said the hack targeted a "select number of users".

The attack was first discovered earlier this month.

The hackers were able to install the surveillance software by ringing the device.

A report by the newspaper the Financial Times found that even if the call was not picked up the surveillance software could be installed.

What is Yolo and why is it so popular?

CBBC Newsround - What do you really think about social media-

The Financial Times said, the spyware was developed by NSO Group, an Israeli cybersecurity and intelligence company.

NSO Group has a software called Pegasus which can collect data from a target device, such as a smartphone. The company has sold the software to governments around the world.

The human rights group Amnesty International wants to stop the company from operating.

The company told the paper: "Under no circumstances would NSO be involved in the operating or identifying of targets of its technology, which is solely operated by intelligence and law enforcement agencies.

What has WhatsApp done?

WhatsApp has around 1.5 billion users around the world. It released a software update to improve security on Monday.

It has also told human rights groups, selected security vendors and the US Department of Justice about the attack earlier this month.