Helium shortages: Should it be used for party balloons? 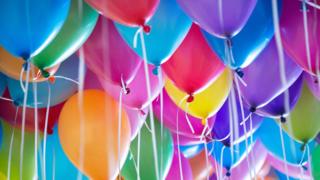 You've probably been to parties decorated by floating helium balloons, but could they soon be a thing of the past?

Some people have been posing the question, as there is a shortage of helium.

While balloons are fun, helium is actually used for loads of very important functions, so its shortage is a problem.

Many people have criticised it being used in balloons in the first place, saying that it should be used for other more important tasks, rather than simply decorations.

Read on to find out more about the issue.

Bird that went extinct comes 'back from the dead'

Helium is an inert gas, which means that it does not react with other substances.

It has the lowest boiling point of any element at -269C and a low density which is why it is used to make items float.

It is formed when radioactive rocks in the Earth's crust break down, gathering in pockets of natural gas under the Earth's surface.

When this natural gas is extracted from deep underground, helium is collected as a by-product. 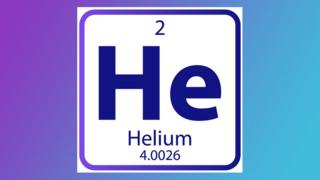 Getty Images
'He' is the chemical symbol for helium in the periodic table, which you can find out more about in the video below

Last year marked 150 years since helium was first discovered, when it was first spotted in the solar spectrum by astrophysicist Pierre Jules Cesar Janssen.

What type of balloon are you?

What is helium used for?

While it may be used to make party balloons float in the air, helium has a range of important functions, including:

Why is it an issue?

The issue is that there is only a limited amount of helium in the world.

As people have needed it more and more, not only have supplies started to run out, but the cost of existing helium has also increased.

It is estimated that the gas is more than five times more expensive than it was 15 years ago.

What is perhaps strange is that there is loads of it in the universe.

The Sun is churning out millions of tonnes of helium every single second and it is, in fact, the only element in the universe present in greater quantities than hydrogen.

But on Earth, helium is actually quite rare because it can escape gravity and the pull of the Earth, and 'leak' into space.

In 2016, a large helium gas field was found in Tanzania, which was described as a "game-changer". But it does not solve the problem that helium sources are not infinite.

Chemist Andrea Sella from University College London (UCL) explains: "Helium is unique. When it's gone, it is lost to us forever."

So lots of people think it shouldn't be used for something like party balloons at all - even if these are small quantities. 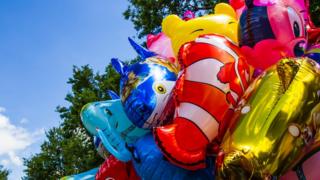 Cambridge University chemist Peter Wothers has called for an end to it being used in this way.

"We're going to be looking back and thinking, I can't believe people just used to fill up their balloons with it, when it's so precious and unique," he said.

"I suspect the amount that is used in party balloons is quite small compared to the other main uses of it, but it's just a rather trivial use of something we should be valuing a little bit more."

In 2012, John Lee from the UK's Balloon Association said that the helium used in members' balloons was not the same as helium needed in the medical profession.

"It's recycled from the gas which is used in the medical industry and mixed with air. We call it balloon gas rather than helium for that reason.

"There is no way the balloon and party industry would even consider taking badly-needed helium from the medical profession. That is important - people have to come first."

We want to know what you think. Should helium be used in party balloons? Have your say below!