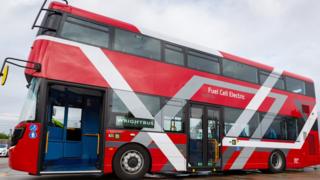 The world's first hydrogen double decker buses will be arriving in London next year, according to Transport for London (TfL).

There will be 20 zero-emission vehicles in the fleet, which will travel along three bus routes.

It is hoped that the buses, which will cost TfL £12 million, will help to combat the issue of high levels of air pollution in the capital city.

This is because the buses will produce no pollution at all from their exhaust pipes, unlike the majority of other vehicles on London's roads.

How much do you know about the world's pollution?

Mayor of London Sadiq Khan said: "We all have a role to play in cleaning up London's toxic air."

TfL's Director of Bus Operations Claire Mann said: "London has the cleanest bus fleet in Europe, but we know we need to go further and faster to tackle the public health emergency caused by dirty air."

Boss of the charity the British Lung Foundation, Dr Penny Woods, praised London for "leading the way in the fight to clean up the air we breathe".

How do the buses work?

The zone is a special region in central London where there are tougher vehicle rules in place to try to limit the amount of air pollution. Higher-polluting vehicles will have to pay a charge to drive in the area, so it is hoped that this will limit the number of these vehicles on the roads.

What do you think about initiatives like greener buses? Do you have any other ideas that cities could introduce to limit the amount of air pollution? Let us know in the comments below!

Electric cars: Environmentally friendly and more popular than ever

A call for diesel and petrol cars to be banned earlier, by 2032