Lily Parr: Football's female superstar will be honoured at museum

Can you guess which footballer has scored more goals than Cristiano Ronaldo and had a 32-year career that included playing in the first England international?

Lily, who died aged 73 in 1978, played professionally in the 1920s. A life-sized statue of the football legend was added to the National Football Museum last year and the museum will now be introducing a new permanent gallery dedicated to Lily's life and legacy.

"I think that people may have heard the name Lily Parr and that she played football.

But many have no real understanding of her dramatic story or influence. And more importantly, how her story fits into the narrative of women's football," said Belinda Scarlett, who is a curator of Women's Football at the National Football Museum.

"The impact and legacy of women like Lily on the development of women's football regionally, nationally and internationally, is highly significant and under-represented."

In 2002, Lily became the first woman to be inducted into the National Football Museum's Hall of Fame.

And, in 2019 Lily also became the first female footballer to be celebrated with a statue in her honour in the UK.

Everything you need to know about the Women's World Cup

Who was Lily Parr? 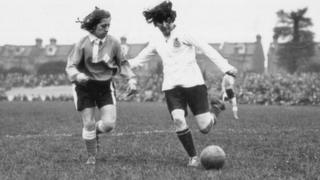 That's about 280 more goals than Cristiano Ronaldo has managed!

In her debut season as a 14-year-old, she scored 43 goals - Kylian Mbappe's first full season with Monaco saw him score only 15 goals. 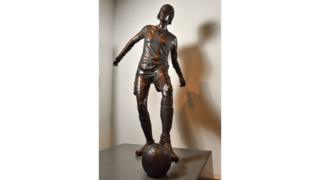 She also played for St Helens and Preston in a career that lasted an amazing 32 years.

When she wasn't bossing the football field, she trained as a nurse and worked in Preston's Whittingham psychiatric hospital.

Women's World Cup 2019: Everything you need to know