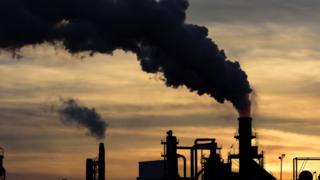 Britain has gone a week without burning any coal to make electricity - the first coal-free week since 1882.

Britain has relied on burning coal for power since the Industrial Revolution, which began in the UK in the 18th Century and spread to other parts of the world.

The Industrial Revolution saw new factories being built and a massive increase in the use of fossil fuels. The world's first coal-fired power station was opened in London in 1882.

Burning fossil fuels has a big impact on the environment and many countries, including the UK, are cutting emissions in an effort to tackle climate change.

"What are you going to do about climate change?"

How has Britain lasted a week without coal power?

According to data, no coal has been used by power stations in Britain since around 1pm on 1 May. Instead, other sources of power have taken over, such as wind turbines, gas and nuclear power.

The country has already gone for more than 1,000 hours in total without needing coal in 2019 - and this year is likely to beat all previous records.

What's the plan for powering the UK in the future?

Coal now accounts for less than 10% of Britain's power output and the government plans to phase out the country's last coal-fired power plants by 2025, in a bid to cut carbon emissions.

"We believe that, by 2025, we will be able to fully operate Great Britain's electricity system with zero carbon," said a spokesperson for the National Grid.

Despite the phasing out of coal, the UK still relies on gas. Although less harmful than coal, gas is a fossil fuel and the government has been asked to cut emissions by 80 per cent by 2050.

Natural landmarks disappearing across the world