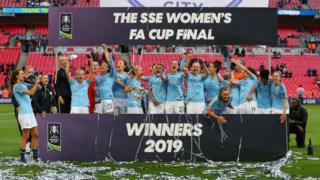 West Ham were the underdogs going into the match.

They were playing in their first major women's final and only became a fully professional side ahead of this season.

Victory at Wembley saw Man City lift their second trophy of the season, after winning the Continental Cup.

More on the FA Cup

Sue Smith speaks ahead of the women's FA Cup final

Are you ready for the Women's FA Cup final?

We catch up with West Ham before the FA Cup final 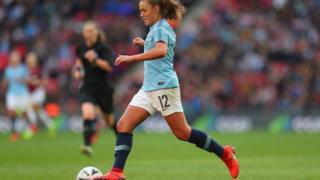 It took City until the 52nd minute to score, with Keira Walsh's shot catching out West Ham goalkeeper Anna Moorhouse.

England international Georgia Stanway's low strike made it 2-0 in the 81st minute.

And substitute Lauren Hemp scored the third goal with two minutes to go. 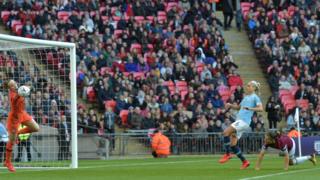 West Ham had a chance in the first half, but Jane Ross' header was well-saved by City and England goalkeeper Karen Bardsley.

Manchester City will complete a domestic season without a loss on their record if they avoid defeat away to the Arsenal next week.

Sue Smith speaks ahead of the women's FA Cup final

Should women's football games be held at big clubs' stadiums?