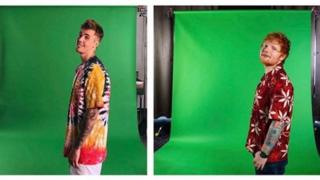 It's the collaboration we never thought we needed, but we are delighted it could be here.

Pop superstars Justin Bieber and Ed Sheeran have teased us with some Instagram posts which are just captioned "10".

They are both standing in front of green screens, which are often used by television and film makers to make people look like they are in a different place.

Ed later posted an edited version of the pictures looking like they are stood together.

Taylor Swift's video for new song ME! is here

TXT names its fan club and drops a new video 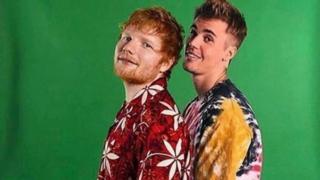 So what could they be up to? Are they making music together?

They have worked together before. Ed wrote Justin's hit song "Love Yourself".

Justin said in March that he was going to take a break from music to repair "some of the deep-rooted issues" so does this mark the end of his break?

And what does "10" mean? Could it be the start of a countdown? Leave your comments below to let us know what do you think.

Ed Sheeran’s secret wedding: Did they or didn't they?

1p and 2p coins being scrapped: What do you think?

Who's dancing to what on Strictly this week?