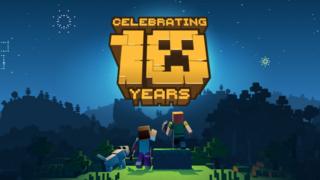 Minecraft is celebrating its 10-year anniversary!

Minecraft was first introduced way back in 2009, with just 32 blocks and a whole lot of wool!

Since then, the game has had a massive impact on the world, from helping kids learn in school, to even having its own movie!

Now, it's one of the most played games in the world, with around 91 million players using it every month!

As part of their 10-year anniversary, Minecraft has released a special anniversary map, full of Easter eggs and secrets for players, and has even teased a potential augmented reality game.

But just how much has Minecraft changed the world, and why is it so special?

When did Minecraft come out?

Minecraft first launched in 2009 and was almost called Cave Game!

It was first created by Markus Persson, and developed by the Swedish game studio Mojang.

The Swedish game developers Mojang which makes the game, was bought by the giant tech company Microsoft back in 2014.

Its main HQ is in Stockholm, the capital city of Sweden.

Ricky went behind the scenes to find out more about the people who make Minecraft, and asked them some of your top questions!

Minecraft is played by thousands of YouTubers online all over the world, and is one of the most-viewed games on YouTube.

But what is it about Minecraft that keeps them playing?

We spoke to top YouTubers Stampy and Netty Plays to find out more about why they love Minecraft, and why they think it's been so successful.

In 2016 Minecraft launched their Education Edition which allowed teachers to help break down tricky subjects like coding and chemistry in fun and creative ways using Minecraft.

It allowed whole classes to play and learn together on the same server at school.

Ricky went to meet a school that uses Minecraft to find out more.

The National Autistic Society has said that playing Minecraft can really help children with autism.

Autism is a condition which means you think a bit differently to other people. It affects the way you live, and how you see the world around you.

Minecraft has been praised for helping some children with autism to become more confident and make more friends.

Minecraft is getting a new AR version