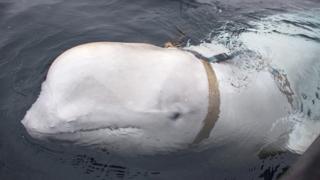 EPA/NORWEGIAN DIRECTORATE OF FISHERIES
Has this whale been trained to spy on people?

A beluga whale has been found off the coast of Norway wearing a strange harness.

A group of scientists and fishermen found the whale swimming near their boat off Ingoya, an Arctic island, asking for food.

They quickly realised that it was wearing a harness around its head and fins when it swam up to their boat.

A marine biologist called Professor Audun Rikardsen said the harness had a special clip which could hold a GoPro camera, and a label on it which said it was from St Petersburg, a city in Russia.

Professor Rikardsen also said his colleague thinks that the Russian navy might have been training whales for a few years. 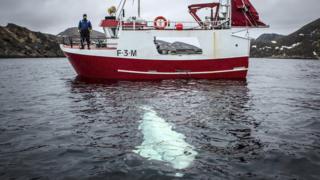 There is a Russian navy base in Murmansk, around 258 miles from where the whale was discovered.

A Norwegian fisherman managed to remove the harness from the whale.

A Russian reserve colonel called Viktor Baranets has been interviewed by a Russian TV station talking about the whale, and he said: "if we were using this animal for spying do you really think we'd attach a mobile phone number with the message 'please call this number'?"

"We have military dolphins for combat roles, we don't cover that up," he said.

Beluga whales, dolphins and orcas are very intelligent animals, and they can potentially be trained in the same way you might train a dog.

But can whales really be trained to work for the military? 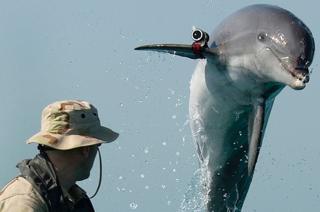 Well, during the Cold War the US military started a special programme for training dolphins and sea lions.

Since then, the specially trained marine animals have been used to help find mines and other objects and alert people of danger.

Beluga whale has rescue team to help it get to safety