Thai Cave Boys Netflix: Where are they now? 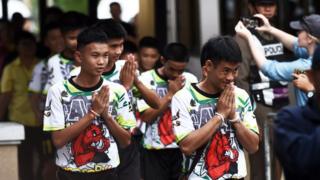 Twelve boys and their football coach, who were rescued after being trapped in a flooded cave in Thailand for more than two weeks, have signed a deal with Netflix.

Eight months on from their ordeal, the story of their escape will be turned into a drama series by the streaming giant.

The group entered the cave in the north of the country on 23 June but were trapped after heavy rains blocked their exit.

All members of the Wild Boars football team were saved in an operation involving 90 expert divers from around the world.

How did the boys get trapped?

All 12 boys rescued from Thailand cave 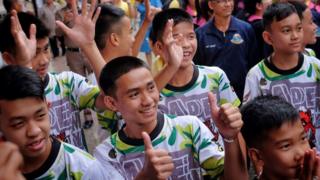 It will turn the 17-day rescue from a cave last year into a TV drama series.

Netflix has had to go through the Thailand government in order to make contact with the survivors because of the amount of media attention they've been receiving.

All of the survivors have been reportedly been paid $100,000 dollars as part of the deal.

Following their escape, the Thai survivors have travelled around the world.

They've been to see Manchester United play at Old Trafford and they've been special guests at the Youth Olympic Games.

Thailand cave rescue: How did they get trapped?

'We had to move literally everything upstairs'