Skydiver finds prosthetic leg that fell off at 10,000ft 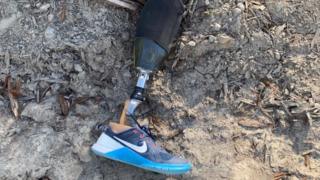 If you've ever seen anyone skydiving, you'll know it can be really blustery when you're at a very high altitude.

But, of all the things to drop off when you're 10,000ft up, a prosthetic leg is not something you want to lose!

That's what happened to an American man called Dion, at the weekend. He went skydiving with some friends, and after they landed back on solid ground again, he and his friends looked around the area for his leg but couldn't find it.

Thankfully he and his leg have now been reunited after it was found in a California wood lumber yard.

The 'space burger' that fell to Earth!

Jumping onto a hotel. From a helicopter. On a bike. No joke.

In a Facebook post, the Sonoma County Sheriff's Office said that workers at a lumber yard in Cloverdale were baffled when they discovered the undamaged prosthetic leg on Monday and got in touch with them - the local police force - to try and track down the owner.

After contacting a nearby airport, it was revealed that a man named Dion had gone skydiving that Sunday and lost his prosthetic leg in mid-air! 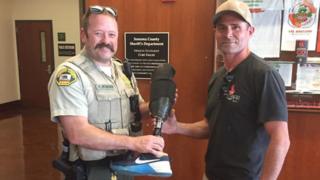 As you can see from the picture above, Dion's leg has now been returned to it's rightful owner.

In the Facebook post the sheriff's office said that Dion "jokingly quipped that this was his second leg lost while skydiving."

"[He] said he lost his first leg in a freak skydiving accident two years ago but that hasn't held him back."

"He promises to make a tether and learn from this but fully plans to stick with his passion."

While Dion was thankful to get his leg back, he was apparently even more thankful it didn't land on anyone or break anything down on Earth!

Skydiver's 7600m jump without a parachute