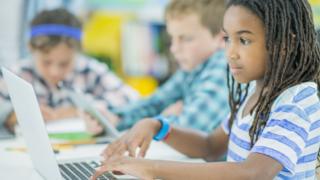 The internet can be great. It's useful for doing your homework, staying in touch with friends as well as watching cat videos on repeat.

But it's not always the nicest place to be.

The government is now planning to bring in new laws and rules, which should make the internet a safer place.

The aim is to make the UK "the safest place in the world to be online".

They want to tackle 'online harms' including fake news and cyber bullying.

The main idea is to have a team called a regulator, which will set out rules that tech companies must follow.

If they don't, they can be fined or their site could even be blocked.

How Joe Sugg deals with trolls - Own It - BBC

Jeremy Wright is the Secretary of State for Digital, Culture, Media and Sport - that means he's in charge of the department which comes up with rules or laws for the internet.

Newsround joined a group of young people, who are all anti-bullying ambassadors for the charity The Diana Award, to ask him some important questions about the plans.

The Vamps guitarist James McVey is also an ambassador for the charity and spoke to the minister about the plans.

He experienced abuse online when he was a teenager and says it can be really tough.

Internet safety: Caught in the Web - a Newsround Special