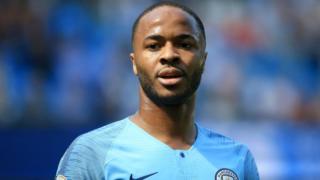 The England and Manchester City player thinks there need to be "harsh" punishments for football fans who abuse players.

This isn't the first time he has spoken out about the issue.

He's one of a number of professional players and clubs who've now signed a manifesto which includes ideas for tackling abuse in the sport, for example players not being punished for walking off.

In an interview with The Times newspaper Sterling said: "the racism problem in football is so bad, runs so deep and is nowhere near being sorted."

He said being racially abused has made him feel "really angry" and "massively disappointed" so he wants there to be more to stop the abuse that players and football staff get.

Football stars speak out against racism

What does Raheem Sterling think should happen?

He wants clubs to be forced play three games behind closed doors and lose nine points for racist abuse: "It sounds harsh but which fan will risk racist behaviour if it might relegate their team or ruin their title bid?"

It's after players in England and Wales came off social media for 24 hours on Friday.

The protest was organised by the Professional Footballers' Association calling for "stronger action to be taken by social networks and footballing authorities in response to racist abuse both on and off the pitch".

VOTE: How has lockdown been making you feel?