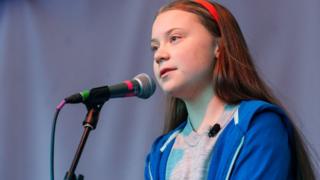 Arriving in London on Sunday 21 April, Greta spoke to a crowd gathered in the centre of London, saying "keep going. You are making a difference."

Extinction Rebellion have been demonstrating in London since Monday 15 April to encourage the UK government to do more to stop climate change.

As part of their protest they have planted trees, glued themselves to stationary trains to prevent the trains from moving and disrupted travel near Heathrow airport.

Find out more about Greta

The protests are designed to be peaceful - but so far 963 people have been arrested, with 40 more being charged with criminal activity.

As a result, some believe that the protests are using up valuable police time.

Many police from the UK have been asked to come and help in London, including forces from areas like Surrey, Greater Manchester and Essex. 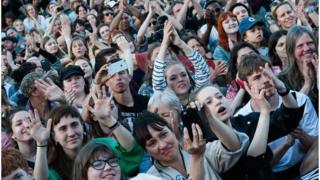 As Greta disagrees with travel by plane, she travelled to London by train over two days from Rome where she had staged a school strike for climate change.

Her journey was followed by fans on social media.

Speaking to the crowds, Greta encouraged them to continue their fight to stop climate change.

Extinction Rebellion organisers say there will be meeting on Monday afternoon to discuss the next stage of their protest.

"For way too long the politicians and people in power have got away with not doing anything at all to fight the climate crisis and ecological crisis. But we will make sure they will not get away with it any longer."

What do you think about the protests happening in London?