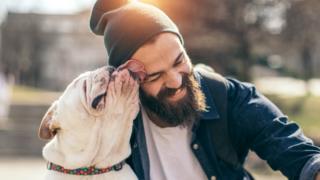 Swiss scientists say there is a higher amount of bacteria lurking in beard bristles than in the fur of your dog.

Researchers from the Hirslanden Clinic in Switzerland took swabs from the facial fuzz of 18 men and the necks of 30 dogs, across a range of breeds - that's the dogs, not the men, by the way - and compared the results between the two.

The results are pretty gross.

EVERY SINGLE BEARDED MAN, aged from 18 to 76, had high counts of bacteria in their beards. While only 23 out of the 30 dogs had the same result. The other dogs tested recorded medium to low levels.

Seven of the men had so much beard bacteria, there was a risk of them getting sick.

Researchers actually found this disgusting information out by mistake, they were trying to find out if men could pick up dog diseases in their facial hair.

"The researchers found a significantly higher bacterial load in specimens taken from the men's beards compared with the dogs' fur."

"On the basis of these findings, dogs can be considered as clean, compared with bearded men," says Gutzeit.

After all that, maybe it's time to tell your dad to have a shave!

Alpaca guard dogs in Berkshire and other crazy animal jobs

The pricey pigeon and other super expensive animals