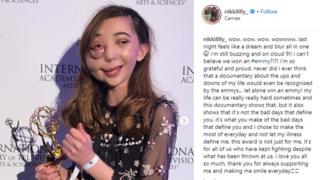 Her programme, called My Life: Born to Vlog, which was shown on CBBC, has won an International Academy of Television Arts and Sciences Award (Emmy for short) for kids programmes.

The International Emmys are one of TV's biggest award shows and give prizes out to programmes from all over the world. Their big gala ceremony took place in Cannes, France.

In the programme Nikki, who's real name is Nikki Christou, talks about how she deals with her rare medical condition arteriovenous malformation (AVM) - a tangle of blood vessels - which causes her to have life-threatening nosebleeds and painful headaches.

Find out more about Nikki

Face Equality Day: 'It's amazing when people see past disfigurement'

These celebs want you to love yourself more

Katie Piper: The more we see, the more that 'normal' changes 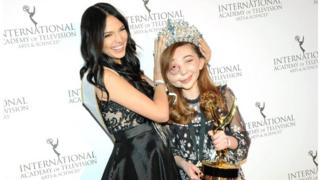 Handout
Nikki with her Emmy

When Nikki was eight she started a YouTube channel to show people what her life was like and to express her thoughts and feelings - she now has more than 700,000 subscribers.

She does lots of campaigning about facial disfigurement, interviews big stars and gives a positive message about about how beauty comes from within. In 2016 she also won kids Bake Off!

I chose to make the best of every day and not let my illness define me.

The award winning programme was recently followed by another on CBBC called My Life: I Will Survive, which followed her progress as she had medical operations on her AVM.

When she was accepting her award Nikki said "This documentary shows we all have bad days but it's what you make out of them that defines you. In order to get the good days you need to get through the bad and I think we all need to know that. We need to be there for each other."