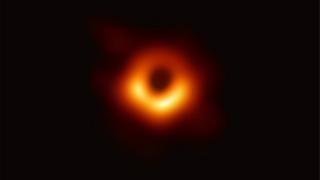 EHT
The first ever photo of a black hole from the M87 galaxy.

Scientists have just revealed the first ever photograph of a black hole!

Until now we've only ever been able to imagine what a black hole might look like, but now scientists from all over the world have worked together to take the first ever photo of one.

Eight observatories from all over the world linked together back in 2017 to form one giant virtual telescope called the Event Horizon Telescope (or EHT for short).

The EHT team have captured an image of a 'monster' black hole, which sits around 54 million light years away from Earth, in a different galaxy called Messier 87.

This black hole is three million times the size of the Earth, and spews out a hot jet stream of particles that stretches for 5,000 light years!

Prof Heino Falcke, of Radboud University in the Netherlands said "What we see is larger than the size of our entire Solar System."

He described the black hole as "one of the heaviest black holes that we think exist. It is an absolute monster, the heavyweight champion of black holes in the Universe."

Check out The Big Question to find out how big space is! 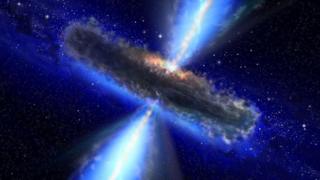 ESA
This is an artist's image of a black hole

What is a black hole, and why is it so hard to photograph?

A black hole is a dying star that has collapsed inward under the pressure of its own weight.

The pull of gravity from its centre becomes so strong that even light can't escape, which is why it looks black.

It essentially becomes a super massive 'vacuum' sucking in stars, planets or anything that gets too close - a bit like when you pull the plug in the bath.

Black holes are also invisible, technically speaking, which has meant it has been very tricky for scientists to capture them on camera.

As things get sucked into the black hole the radiation energy bursts out from behind it, which the EHT team have used to help them take a picture, and is the reason why it looks a bit like a silhouette.

Most galaxies are thought to have a supermassive black hole at their centre. 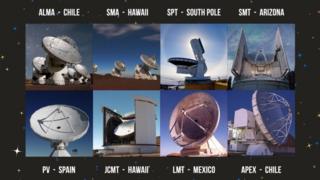 Teams of 200 scientists from eight different observatories all over the world (including one in the South Pole!) joined forces to try to combine their telescopes into one huge telescope in 2017.

They used the telescopes to measure the wavelengths and radiation (the stuff getting sucked in and out of the black holes).

Until recently they didn't have technology advanced enough to do this.

Scientist Katie Bouman made the breakthrough by developing the mathematical algorithm which pieced together all the data from the EHT. Without her contribution the project would not have been possible! 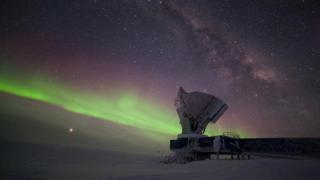 Michael Bremer, an astronomer and project manager for the EHT, said the combined force of the telescopes is powerful enough to spot a golf ball on the Moon!

It took around 10 days to take the picture, because of the weather.

Then it took two years for the researchers to analyse the data recorded. 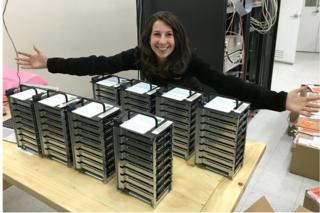 Katie Bouman
Katie Bouman with all the hard drives full of data from the EHT.

The information they gathered was too much to be sent across the internet.

Instead, the data was stored on hundreds of hard drives which were flown to a central processing centres in Boston, US, and Bonn, Germany, to put together the information.

They used supercomputers to process the information, they're so powerful it's like using around 10,000 laptops at the same time! 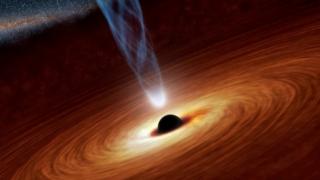 What did they learn?

The picture shows a bright 'ring of fire' which is caused by superheated gas falling into the black hole.

This light is brighter than all the billions of other stars in the galaxy combined.

The photo also gave scientists a better idea of what happens when material gets sucked into a black hole, and how light is bent and warped near it.

It also helped to prove the original theories about black holes and gravity, by famous scientists like Albert Einstein.

The scientists have also tried to take a picture of the Sagitarius A*, the black hole which sits at the centre of our galaxy, some 26,000 light years away.

However they've said this is more difficult to photograph than the big one in M87, because our black hole is not as big or bright.

Scientists are trying to photograph a black hole, this is how...