Virgil van Dijk says Raheem Sterling is the Player of the Year - do you agree? 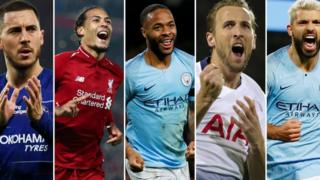 The prize, which will be awarded on 28 April, sees footballers vote for fellow professionals as the best player for the current season.

Manchester City's Sterling and Van Dijk are strong favourites after fantastic seasons, with their clubs in contention to win the Premier League.

"I did what I thought and I thought he deserves it," said Van Dijk. "He's had a fantastic season. I could have voted for Bernardo Silva as well, and another couple of players from City."

The nominees for PFA Player of the Year will be announced soon, with six players up for the prize every season. Players cannot vote for their own team-mates.

Here are 10 players we think are in the running, but who is your favourite?