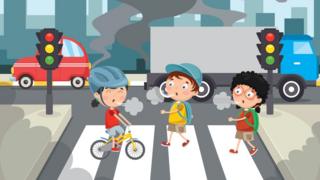 From today, London will have tough new rules to help tackle air pollution.

The aim is to encourage people who have older, more polluting vehicles, to avoid driving in to the capital and to improve air quality.

So what is the ULEZ all about and why is air pollution such a problem?

What is the Ultra Low Emission Zone?

It is an area in central London where tougher vehicle rules are in place.

It means some drivers might have to pay extra to drive there.

The daily charge is only if a vehicle is 'too polluting' - cameras will read its number plates when it enters the zone and check if it meets minimum emission standards.

Drivers of most cars, motorcycles and vans will have to pay £12.50 but for heavier vehicles including buses, coaches and lorries the fee is £100.

There are also plans to make the zone bigger from October 2021. 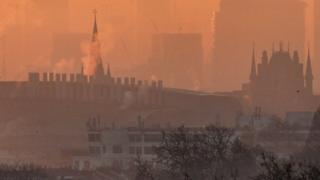 Why does London need an Ultra Low Emission Zone?

There are thousands and thousands of vehicles in London so its roads can be incredibly busy.

Lorries, buses and cars which run on petrol and diesel give off fumes which you can't always see.

These pollute the air around us and can be harmful.

If there are lots of vehicles doing this you can imagine that the air we breathe can become quite 'dirty'.

At least 360 primary schools in London are in areas with levels of pollution which are higher than what's thought to be legally safe.

It's hoped the ULEZ will help improve air quality.

How pigeons are helping to fight pollution

Why is air pollution a problem?

Air pollution is when harmful gases or particles get into the air we breathe.

There are lots of things which can make air 'dirty' - for example fumes from traffic and vehicles, power stations and people smoking.

It can cause both short and long term effects on someone's health, especially for people with heart or lung conditions such as asthma.

Air pollution can also shorten lives and damages quality of life for many people. 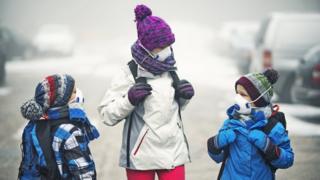 Pollution isn't just an issue in London and the UK - it's a problem all over the world.

In some countries it can be so bad that it's hard to see and some children even have to miss school.

Take our quiz and see how much you know about pollution around the world.

Air pollution and road safety: Should schools close their roads to traffic?