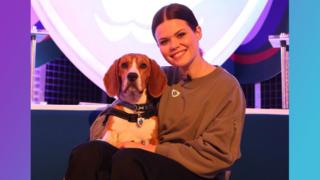 Blue Peter has a new dog and you will meet him in today's episode!

Two-year-old Henry, a beagle-basset hound, is a rescue dog. The programme adopted him from Dogs Trust, the UK's largest dog welfare charity.

Presenter Lindsey Russell says: "Henry is such a friendly dog and I can't wait to have him in the studio every week. He's already met the crew, had a good sniff around and seems to love it."

Check out our gallery of Blue Peter pets through the years

Thursday's show will follow Henry's story as he leaves the rehoming centre and gets used to his new life, before arriving at the TV studios.

He will also be given a medical check-up by CBBC's Pets Factor vet Rory Cowlam.

Who's in the The Voice UK final this weekend?

Dumbo: 'It's OK to be different'

Blue Peter has a long tradition of having dogs on the show. Henry will be the 10th, following in the pawprints of previous pooches Petra, Shep, Bonnie, Mabel and Meg.

There have also been five tortoises, nine cats and two parrots on the show.

"Pets have always been such an important part of Blue Peter and it's so exciting to be welcoming the latest one to the show," added Lindsey.

Blue Peter is on iPlayer and CBBC at 5:30pm on Thursdays