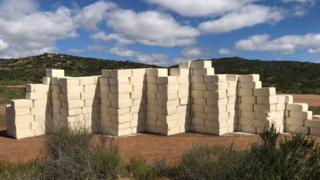 US President Donald Trump wants to build a wall on the border between the United States and Mexico - and it's happening, although not quite in the way he planned.

This wall is being built from cheese - specifically a hard cheese called cotija that comes from Mexico.

Trump to seek special powers to pay for border wall

And President Trump isn't the man behind it. The creator is an artist called Cosimo Cavallaro who's made this seven-metre-long wall in Tecate, California.

It stands just a few feet away from a metal fence topped with barbed wire, separating the US and Mexico. 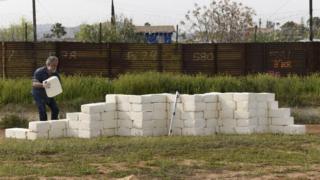 But it's not because Mr Cavallaro supports the idea of a border wall. Quite the opposite, in fact.

On the website cheesewall.com, it says: "He was inspired to start the cheese wall because of the political environment we are living in today. He believes all people - whether they are on this side of the US-Mexico border or the other - are the same.

"Cosimo also recognises that at some point, we all feel like outsiders, so in some way, we can all feel like we're on the other side of 'the wall'."

If it takes a ¼ mile Cheese Wall at the border to make people look at the 'wall' in a different way, that's what Cosimo will create.

Construction of the wall began on 25 March - the day before President Trump saw the first funds to build the border wall given the go-ahead.

Made out of large blocks of expired cheese, the aim is for the wall to be six-feet high.

How long it is will depend on how much money the team behind it can fundraise, but they've set an aim of 1,000 feet (more than 300m). 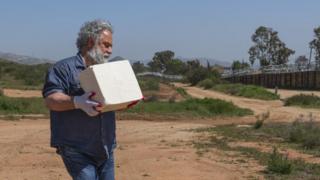 Each block is individually made out of hard cheese and costs $100 (about £76).

Not too cheesed off yet?

Seven things you'd never believe are made out of food

Stuff to do with food you don't eat

According to their website, the team say the plan is to raise $500,000 to buy the expired blocks of cheese, rent the land for the art installation, and pay the people who'll be building the wall.

The site states: "This is much less than the $10 billion it may take to build other walls."

Who is Cosimo Cavallaro?

The artist was raised in both Canada and Italy, and is known for his unusual and sometime controversial artworks.

This isn't the first time he's used cheese. Back in 2009, he covered a New York hotel room, including the walls, ceiling and bed, in melted mozzarella. 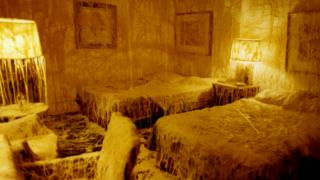 He's also covered an armchair, jacket, cowboy boots and even the supermodel Twiggy in cheese.

Aside from the cheese wall, his most famous artwork was unveiled back in 2007 - a life-size sculpture of Jesus on the cross, made of chocolate.

It had been due to go on display in New York during Holy Week, but the exhibition was shut down before it even opened due to the number of complaints.