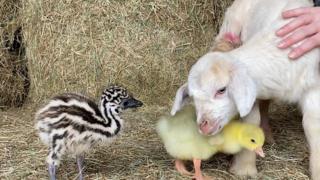 Caenhill Community Centre
Taz, Wiggle and Alfred are the best of friends!

As unusual animal friendships go, this one is pretty special!

Wiggle, the Sebastopol goose chick, Taz the emu chick and Alfred the kid goat have become the best of friends at Caenhill Countryside Centre in Wiltshire.

The trio had a bit of a tough start in life, as Wiggle and Taz were born in an incubator and Alfred was not getting enough milk from his mother.

So volunteers at the farm decided to raise them together, and they have formed a special bond as a result. Awww cute!

We already knew that animals make friends just like us, but who knew so many were making pals across the species? Let's take a look.

Why dogs really are your best friend!

Giddy up! Meet Molly and her pal the possum

Giraffe and a dog 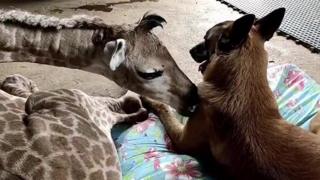 This might seem like an unusual friendship, but a baby giraffe and dog have been hanging out together in South Africa.

A video of the pair has been shared, showing Jazz the giraffe with Hunter the dog.

Jazz was rescued by a farmer who found him abandoned at two days old.

He was taken to The Rhino Orphanage in Limpopo Province and that's when he met his new bestie!

Hunter was so taken by Jazz, that he refused to eat or leave his side until he was better. The two have been BFFs ever since. 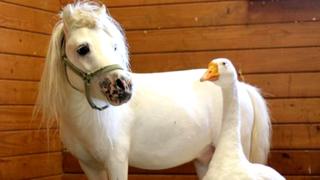 A friend is someone who's there in your time of need and that goes for this caring pair!

Hemingway the goose, offered a helping quack when Waffles the mini-horse became ill, at the animal shelter in Pennsylvania in the United States.

The pair were rescued from a local farm and they're both up for adoption together, so that they stay side by side forever.

Horse and a sheep 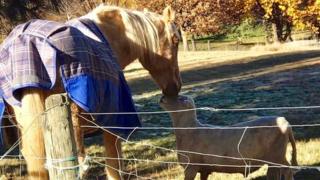 Actor Sam Neill owns a farm in New Zealand, and back in March shared a video of his horse and sheep strolling around the paddock together, with the caption: "This is what FRIENDSHIP looks like."

It sounds like the sheep has another incentive for wanting a much taller chum, with Sam adding, "and when it rains, the old ram stands under his friend the horse to stay dry".

Dog and a lion

Usually a lion and a dog would be enemies, but not these two!

Bone Digger the lion and Milo the dog met at a zoo in Oklahoma in the US.

Milo is so helpful, he's even been spotted cleaning the lion's teeth! Cute but gross!

Dog and a cheetah cub 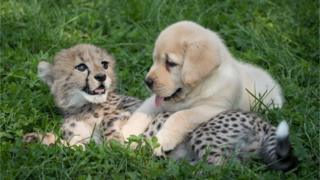 10-week-old cheetah cub, Emmett and 7-week-old puppy buddy, Cullen, formed one of nature's most unlikely friendships when they met at Columbus Zoo.

Dog and a monkey

The monkey had been removed from its home at birth, according to police, so locals paired the monkey with a dog, who they believed would look after it. 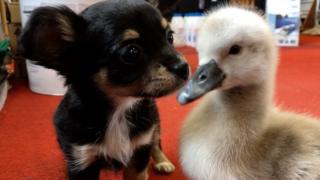 A very special bond was formed between this orphaned cygnet (a baby swan) and a chihuahua after it was rescued.

Sidney the cygnet was found with a neck injury in long grass in St Ives, Cambridgeshire. 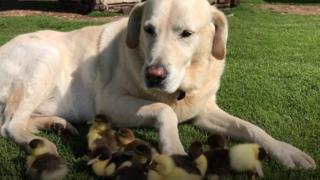 In 2018 we saw Fred, the 10-year-old labrador, become an unlikely foster parent to nine ducklings.

They were found waddling around the grounds of Mountfitchet Castle in Stansted, Essex, with their mother nowhere to be seen.

Staff took them inside, where Fred decided he's be the one to keep a close eye on them.

It's baa-rilliant! Sheep signed up to French school to keep class open

The superglue slug and other amazing animal defenders

Check out these animals in the snow!

How to take photos of wild animals without harming them