After a long day of training, most footballers probably wouldn't turn down a free cheeseburger - even if it isn't officially part of their healthy diet.

But when this particular McDonald's Big Mac was found at Colchester United's training ground, the team were understandably a bit confused.

That's because the meaty treat wasn't a fan's leftovers, but was instead attached to a polystyrene box with a GoPro camera inside.

As it turned out, it had in fact aimed for space, before falling back to earth with a bump!

The pud that's lost in space

Thankfully the Essex-based footie team decided to live tweet all about the mysterious events - from the moment they first found the unidentifiable frying object, to the moment they figured out where it came from.

This is how it all unfolded... 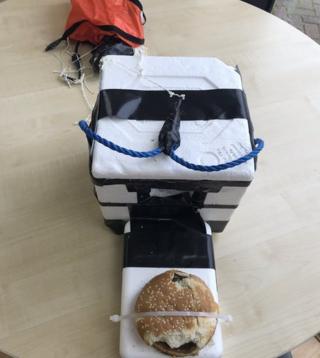 Colchester United shared this photo of the burger, posting: "There was no card inside, so we didn't really know what to do. Honestly, what DO you do with a frozen burger? Then the phone rang!"

The chap on the phone explained that the box, burger and Go Pro camera was his, he was from Sheffield, and he'd sent the burger into space. As you do. And he was coming to get it back!

"Then, at just before 4pm, our burger launcher arrived through the gates at Florence Park!"

He's Tom Stanniland, who explained that he'd done it to entertain the 2.7 million followers on his YouTube channel.

In a video he explained: "I sent a burger into space using a weather balloon. It's gone about 24 miles up before the weather balloon popped. It's come back down over 100 miles away and landed right here."

Er, Tom? Space is actually over 60 miles up, so it was a good try but, it's no Millennium Falcon.

"We had a tracker in the styrofoam box and we lost connection with it when it got so high. It's crashed landed here," he added.

In a separate video, he added: "In the morning the groundskeeper found the box, turned it upside down and the tracker got a connection again. So we've found it, and just followed it."

How did the story end?

Well what do you do with a burger that's been exploring the atmosphere?

It appears Tom was keen to try it. Rather him than us! 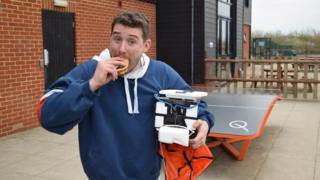 The verdict? He revealed: "It's not nice! It's drying my mouth out."

And with his burger and camera safely retrieved, Tom headed back to Sheffield.

We're wondering if there's even the tiniest chance a bite of the "spaceburger" will give him some kind of superhero like powers?

More likely though, it'll just leave him a bit gassy!

The pud that's lost in space

Astronauts have held the first ever pizza party in space!

Meat and potato pie sent into space for science experiment