Euro 2020: Why were tennis balls thrown during Ireland's qualifying match? 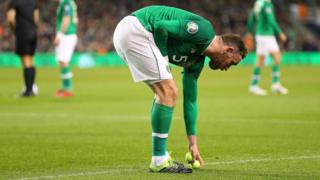 We're used to seeing balls on a football pitch, but normally it's footballs.

But last night, tennis balls were thrown on to the pitch by Republic of Ireland supporters during their Euro 2020 qualifier match against Georgia.

It's because they're not happy about the people running their governing body, the Football Association of Ireland (FAI).

Conor Hourihane scored for the Republic of Ireland in the first half, which led the team to a 1-0 win against their opponents.

Real Madrid and other winners who became losers 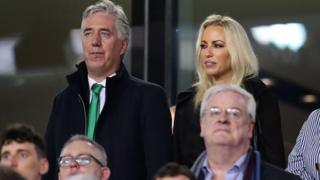 But before that goal was scored there was a break in play as home fans threw the yellow-green tennis balls on to the pitch.

It was all done in protest that John Delaney is still in the management of the FAI.

Delaney had been the FAI's chief executive but after questions were asked about why he'd loaned a huge amount of money to the governing body, he stepped down from his role. 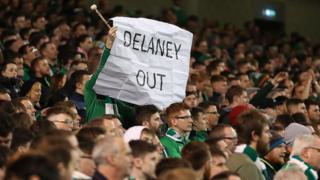 However, they created a new position of executive vice-president for him so he's back in the team running the FAI.

Fans aren't happy at what's happened and showed this during the match by throwing tennis balls and holding up huge posters with the words 'Delaney Out.'