Raheem Sterling: 'Players should not leave the pitch if there is racist abuse'

England and Manchester City forward Raheem Sterling says players should not leave the pitch if there is racist abuse from the stands.

Speaking in a press conference ahead of Manchester City's Champions League Quarter Final against Tottenham, Sterling said leaving the pitch is not the right response because "if you walk off they win".

Sterling, was one of several England players to have racist chants directed at them during last month's Euro 2020 qualifier in Montenegro.

Sterling responded by putting his hands to his ears after scoring in the 5-1 win.

"I wouldn't personally agree with walking off" said Sterling. "To win the game would hurt them even more. They're only trying to get you down."

Sterling was put forward as the team's spokesperson after widespread reports that England players were racially abused by Montenegro fans.

He called on governing body Uefa to heavily punish Montenegro, saying the behaviour was "unacceptable".

Sterling has been recognised for standing up for black players over the issue of racism. The Man City forward recently criticised Leonardo Bonucci after the Italian defender said Moise Kean was partly to blame for racism he'd received from the stands.

Sterling has been called a "trailblazer" in being named sportsman of the year at the 2019 British Ethnic Diversity Sports Awards, while England manager Gareth Southgate, says he's now part of the leadership group within the national team squad.

And, on the pitch, Sterling is in the best form of his career, scoring four times in the last two England games.

Sterling has come a long way to get to this point, so let's look at how he got here.

The rise of Raheem 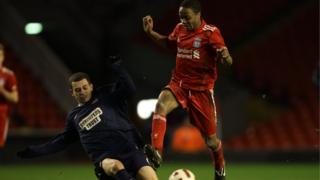 Sterling had a difficult start to life, moving from Jamaica to England as a two-year-old after his father died from gun violence.

His obvious talent for football was quickly noticed and he made a high-profile move to Liverpool from Queens Park Rangers when he was still a teenager.

At just 17 years old, he was in the Liverpool first team squad.

He made his debut for the England team not long after that and before hitting 20, he played at the 2014 World Cup for England. 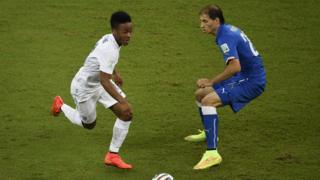 In the same year, Sterling was given the "Golden Boy award" for being the best young player in the world.

From Liverpool to Manchester City 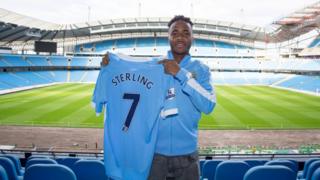 Following his move to City, the coverage surrounding Sterling became more intense and more personal - with some people questioning his motives for moving.

He was, after all, getting paid a lot more money at City.

Some people asked if he was worth the money and he also began to get a lot more criticism for his performances.

For instance, after the England team was knocked out of Euro 2016 by Iceland, one newspaper called Sterling a "footie idiot." 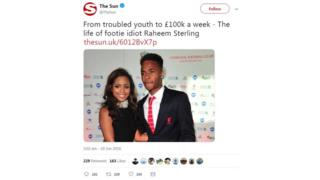 Speaking in a recent interview with The New York Times, Sterling said: "From the very start of my career, there has been a perception of a flashy kid from London: loves cars, loves the flashy lifestyle.

"I'm not saying I'm a saint or anything, but that is the complete opposite of who I am."

"These people do not know me. They will define me by what they read about me; that is how they will treat me. When people are making the public believe you are a character you aren't, that is hurtful, and it is degrading."

As well as being labelled 'flashy', Sterling also had stories written about him visiting pound stores, flying on budget airlines and eating at discount pastry stores.

"What is the need for this story? Sometimes you ask what the motive is," Sterling said.

On the pitch Sterling was showing how good he was - scoring 18 times as Manchester City won the 2017-2018 Premier League title. This season Sterling has already scored 19 goals and is being tipped by pundits as a leading contender for Premier League player of the season. 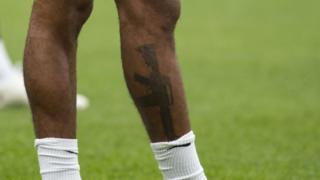 But again, a lot of attention was being paid to what he was doing off the field.

In May 2018, Sterling got a lot of criticism for getting a gun tattoo on his leg. Many people thought that was a negative thing to do and said he was being a bad role model.

But Sterling claimed the tattoo was in memory of his father, who had been a victim of gun violence.

Standing up and speaking out 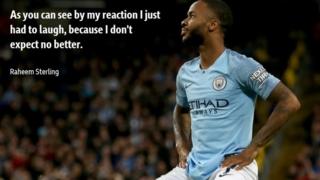 Sterling rarely gives media interviews but does express himself on social media.

After he suffered alleged racial abuse from fans during a match in December 2018 against Chelsea, he spoke out about the incident and the way he feels there is unfairness in the way the media report how black and white players spend their wages. 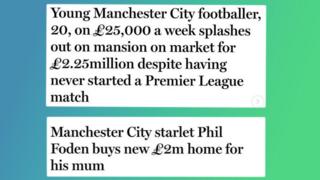 He said that both players were buying homes for their mothers but he felt it showed the way that young white players are shown in a more positive way than young black players.

A leader for England 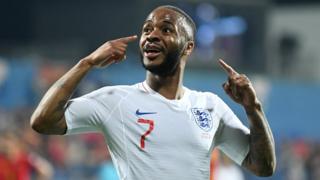 He followed up the hat-trick with another goal in the game against Montenegro. But, this time, it was Sterling's off-the-field behaviour which drew the most praise.

Racist chanting was directed at a number of players, including Danny Rose, by local fans during the qualifier in Podgorica.

BBC football commentator John Murray was there - he said he heard chanting throughout the game and spoke to photographers there who told him the abuse the England players received was "disgusting".

Sterling came forward in front of the world's media and demanded football's authorities do more to crack down on racism: "A couple of idiots ruined a great night and it is a real sad thing to hear." 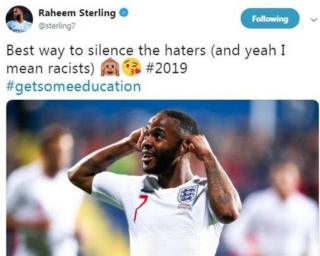 He called for a stadium ban for any fans who are being racist.

Montenegro have since been charged by European football's governing authority, Uefa.

England football: Viv Anderson looks back at his historic career