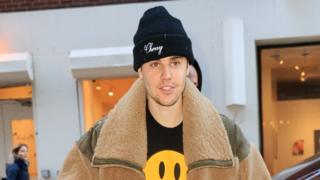 Justin Bieber has told fans that he's going to take a break from music to repair "some of the deep-rooted issues" he has.

In an Instagram post published on Monday, the 25-year-old musician talked about the pressures that come with becoming famous at a young age.

"Music is very important, but nothing comes before my family and my health", Bieber said.

But he promised fans that he will return to music with a new album when he's ready.

I've toured my whole teenage life, and early 20s, I realized and as you guys probably saw I was unhappy on my last tour and I don't deserve that and you don't deserve that. You pay money to come and have a lively energetic, fun, light concert and I was unable emotionally to give you that near the end of the tour. 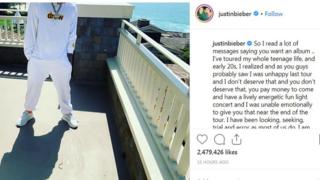 His wife Hayley Baldwin showed her support by replying: "That's right, love you so much it hurts!!!"

It's not the first time Bieber has posted about not feeling himself recently.

Earlier this month, he posted on Instagram to tell fans that he'd been feeling "disconnected and weird".

Justin Bieber haircut: Singer shaves off hair and the internet is very happy